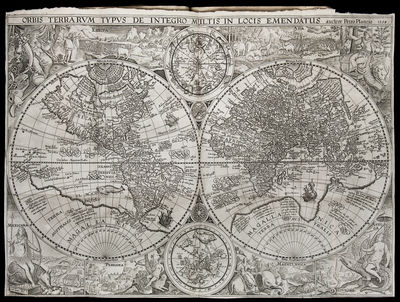 The preferred large format French language 3rd edition. This is a large and absolutely genuine example of this classic illustrated travelogue to the East and West Indies, termed by Lach "the most important of the firsthand accounts published independently of the great travel collections" (I.198). No other book contained so much practical intelligence on the East and West Indies as Linschoten's. Unhindered by the censorship that affected writers from the Iberian Peninsula, the author included such information as sailing directions, physical descriptions of countries, and statistics on commerce and trade. The work was held in such high regard that for nearly a century, every Dutch ship headed for the East carried a copy of a Dutch edition of Linschoten. This copy of the third French edition (esteemed for its plates; see below) is rather unusual for being in an entirely contemporary condition—in its original binding, and entirely unsophisticated internally.

Although the work contains valuable reconnaissance for the New World (see below), the material on the East Indies is far and away the most valuable, being the fruit of the author's own observation. In the service of the Portuguese, Linschoten spent five years in Goa (1583-88/9), making numerous visits to the mainland. He was thoroughly immersed in Indian culture and the complex relations between the Portuguese colonial apparatus and indigenous peoples. Highlights include a first-hand descriptions of the caste system, political structures, business practices of the Banyas, and exotic natural phenomena.

The first book treats the East Indies and East Africa, including regions as far east as Japan. The second book describes the navigation of the coasts of West Africa around the Cape of Good Hope to Arabia, together with the coasts of the New World, and includes a real roteiro after the Portuguese royal pilot Diego Affonso that sets out sailing directions from Portugal to India and from island to island in the East Indies. The third book is devoted to North America (Florida), the Caribbean and Brazil.

The work was first published in Dutch in 1595/6. Latin and English translations followed in 1598. The first French edition appeared in 1610, but the plates are copies of the reduced version based on those in the De Bry; the second and third French editions return to the original, folio-sized plates of the Dutch edition and are accordingly the most desirable.