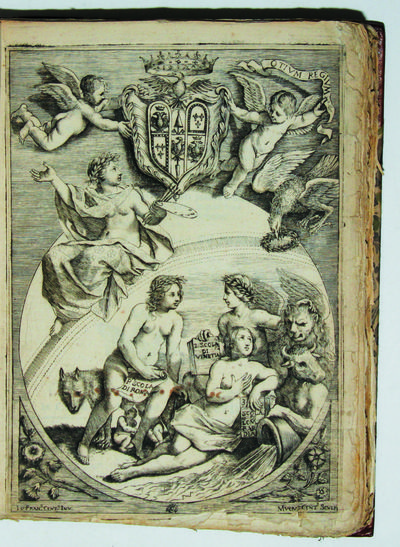 by SCANNELLI, Francesco
Cesena: Neri, 1657. * Besterman, Old Art Books, p. 93; Schlosser-Magnino p. 614 (rather harsh elsewhere); Cicognara 204; Hollis BAL 6360 (specifying frontispiece and 18 preliminaries); not in Berlin Katalog.. Scarce first edition of this 17th-century survey of Italian painting, and a valuable document for developing Baroque “gusto” by a cultivated amateur. Scannelli follows Mancini’s tripartite division of Italian schools—Roman, Venetian and Lombard, and in an age in which microcosms were everywhere, he compared the whole of Italian painting to a body, likening Corregio to the brain, Titian to the heart, Raphael to the liver (!), and Veronese to the organs of reproduction. According to the Dictionary of Art, Il Microcosmo “stands alongside the works of Mario Boschini (La carta del navegar pittoresco, Venice, 1660) and of Luigi Pellegrino Scaramuccia (Le finezze dei penelli italiani, Padua, 1674), both of whom quoted him. Scannelli’s treatise represents a reaction against the notion, formulated by Giorgio Vasari, that the art of Florence was pre-eminent throughout Italy. He reevaluated the Lombard-Emilian school, led by Correggio, seeing in it an ideal synthesis of the finest achievements of the Venetian (Titian) and of the Roman-Tuscan (Raphael) schools... In taste, he showed classicist inclinations, modified by a liking for vivacity and naturalism, qualities well represented in the art of his ideal painter, Correggio” (Franco Bernabei, DA XXVIII.33-34). Little is known about the author, save that he was a priest and a physician, that he served at the court of Mantua until Francesco I d’Este died, and that he traveled to Milan, Rome and Venice. (Inventory #: 2044)
$3,000.00 add to cart Available from Martayan Lan
Share this item
Martayan Lan, Inc.
Offered by