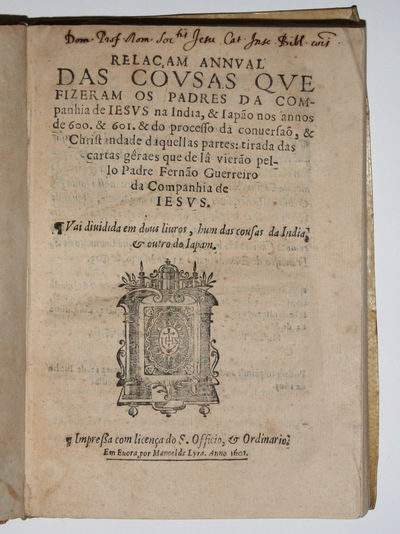 by GUERREIRO, Fernao
4to., 11, (1) ff., 13-259 pp. Note: L3-4 misbound after L5. Bound in contemporary flexible vellum, title written on spine in ink. Inscription in upper margin of title: Dom. Prof. Societatis Jesu. Cat. Inscr. Bibl. Cois (inscribed in the catalogue of the library in the housed of the professed, Society of Jesus, at Coimbra?); block a bit loose in binding; some even toning and light foxing to a few signatures, but withal an unusually fine unsophisticated copy.

Rare first edition and the first and rarest of this series of Portuguese-language reports from missions overseas, with a decided emphasis on Asia. Separately issued over a period of 8 years, the first volume appeared in 1603 and concluded in 1611. Because the individual volumes treat a relatively brief time-span, the author treats events in much greater detail than can generally be found in individual letters or in most synoptic histories of the Jesuits in Asia. Of all the languages in which the Jesuits advertised their activities in the East, those in Portuguese tend to be the rarest.
"In his 'to the reader' Guerreiro indicates that he conceived of his Relaçam as a continuation of Luis de Guzman's two volume Historia de las Missiones…en la India Oriental…China y Japon (1601). As a consequence, he usually begins his accounts with 1600, the date when Guzman left off. In moving from area to area in the East, he ordinarily starts with a review of the number and location of Jesuit establishments, the persons working in them, and the activities with which they busied themselves. He indicates that by 1601 the Jesuits had divided the Orient administratively into three provinces: 1) North India, 2) South India, 3) China and Japan. He claims that in these provinces they had more than one hundred houses—including colleges, rectories, and residences—in which almost 600 Jesuits worked…"
"With respect to the province of China and Japan, he concentrates initially on the fortunes of Christians in Japan after the death of the Hideyoshi (1598) to 1602 and notes the arrival of the Dutch. In his section on China to 1602 he relates the story of the Jesuit penetration of the mainland, describes Nanking in detail, and comments on the good will exhibited by the mandarins. This is followed by a summary of the wars being fought in the Moluccas and the hardships and the Christians at Amboina and elsewhere" (Lach, Asia III.1.316-17).
OCLC lists Catholic University, the Bell, Yale. A Spanish translation appeared the following year in Valladolid; the China section alone in a German translation of 1611 (Historischer Bericht. Augsburg). There is no complete set of the work's five volumes in the U.S. Writing nearly 75 years ago, C.H. Payne was only able to locate a single complete run, in the BL (Jahangir and the Jesuits. 1930, p. xiii). A complete copy was sold in the great Travel & Exploration Sale at Reiss 1989: #120, modern calf, 62,000 DM.