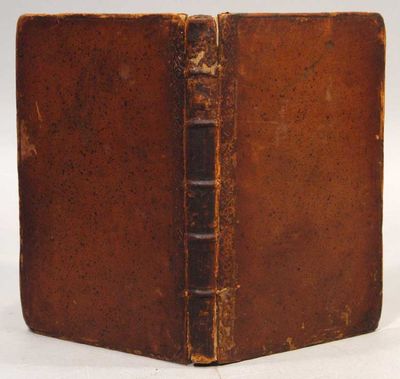 by HOLLES, Denzil
1699. HOLLES, Denzil. MEMOIRS OF DENZIL LORD HOLLES, Baron of Ifield in Sussex, From the Year 1641, to 1648. London: Printed for Tim. Goodwin at the Queen's Head against St. Dunstan's Church in Fleet-street, 1699. First edition: The text was taken from papers written by Lord Holles during the winter of 1647-48 but edited by John Toland and first published in 1699. Engraved frontispiece portrait of Holles by R. White. Holles' "Epistle dedicatory," dated February 14, 1648, is addressed 'to the Unparallel'd Couple' Oliver St. John and Oliver Cromwell, 'the two grand Designers of the Ruin of three Kingdoms.' And the text includes an account of Marston Moor and the events of 1647, including the seizure of the King. Octavo: A-P8,Q4. [i-iv],v-xv,[xvi],213,[19] pp. Errata list on p. [xvi], and p. [19] has a publisher's advertisement immediately below the end of the index. Contemporary calf binding with a blindroll along the back-edge of both boards. The binding is scuffed and has cracked joints, though both boards are still attached, showing shallow loss at heel and crown, loss of label and some scaling on back. Armorial bookplate of Sir Hew Dalrymple of North Berwick Baronet and Lord President of the Session (1698-1737), who was a strong supporter of the union of Scotland with England, on front pastedown and a modern ink ownership on the first flyleaf. The majority of the front free endpaper has been torn away and only a stub remains. Very good overall. Abbott 1228; Wing H2464; Lowndes (1871) II, p. 1092. (Inventory #: 85230)
$650.00 add to cart Available from
Boston Book Company
Share this item