The Works of His Grace, George Villiers, Late Duke of Buckingham. in Two Volumes 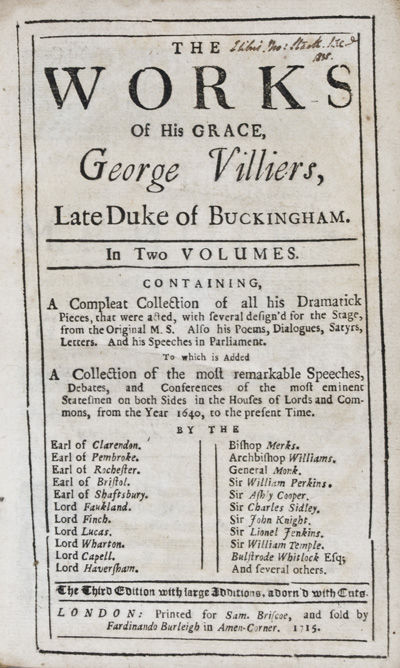 by Villiers, George
London: Printed for Sam. Briscoe, and fold by Fardinando Burleigh in Amen-Corner, 1715. Hardcover. fair. 2 octavo volumes. Full leather binding. Vol. 1: 416 pp. Frontis piece portraying b/w steel engraving of a portrait of the author. Each section of the volume has its own title page. Three of the sections have their own steel engraved Frontis piece: "The Restauration: or, Right will take Place. A Tragic Comedy", has a lovely b/w scene from the play. "The Battle of Sedgmoor: Betwixt King James's Forces and the Duke of Monmouth, Rehears'd at White-Hall. A Farce" depicts the Earl of Feverham, General in lovely armor. "Upon Nothing: A Poem", depicts John Baron Wilmot, England and Viscont in Ireland, Earle of Rochester of Adderbury in Athlone (which is oversized and therefore, folded along outer edge.) Vol. 2: vi, xvi, 332 pp. Steel engraved Frontis piece of Mrs. Behn. Again, each section has its own title page. Some sections have their own steel engraved Frontis piece: "The Rehearsal, As it is Acted at the Theatre Royal, by Her Majesty's Servants" depicting a lovely scene from the play, (which is oversized and therefore folded on the bottom and outer edge) "The Chances, a Comedy acted by Her Majesty's Servants, at the Theatre-Royal" (also oversized and therefore folded along bottom and outer edges) and "An Essay upon Reason and Religion" depicting three men in serious conversation. The author, George Villiers, 2nd Duke of Buckingham, (1628 - 1687), was an English statesman. He took part in the English civil war, which consisted of a series of armed conflicts and political machinations that took place between Parliamentarians (known as Roundheads) and Royalists (known as Cavaliers) between 1642 and 1651, where he fought for the King, and took part in the attack on Lichfield Close in April 1643. Because of his participation in the rebellion, his lands, were confiscated and given to his father-in-law, Thomas, Lord Fairfax. Though they were later restored, intrigue and suspicion would follow him the rest of his life. Despite his turbulent political career, even during his life, his literary and poetic gifts were recognized and highly praised. Age wear, scuffing and chipping to leather due to age. Front board of first volume detached but present. Peeling to leather around spine. Ink transcription on front endpaper of first volume. Yellowing to pages due to age, but text is pristine and clear. Exterior in fair, interiors in good condition. (Inventory #: 19415)
$185.00 add to cart or Buy Direct from
Eric Chaim Kline Bookseller
Share this item