Journey to Arizona in 1876 [INSCRIBED AND SIGNED] 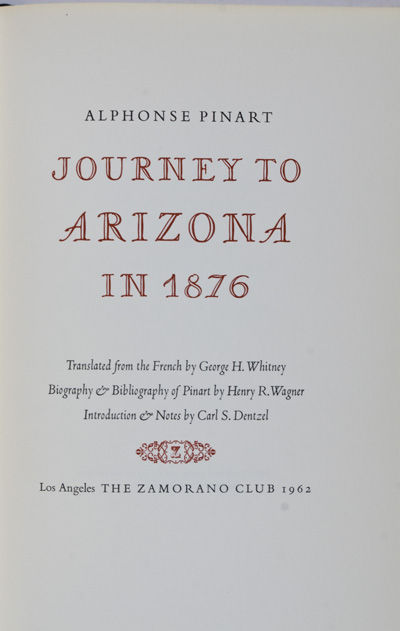 by Pinart, Alphonse; Carl S. Dentzel (Introduction & Notes)
Los Angeles: The Zamorano Club, 1962. Limited ed. Hardcover. g. 8vo. xi. 48pp. Translated from the French by George H. Whitney; Biographical note and Bibliography on Alphonse Pinart by Henry R Wagner; Introduction and notes by Carl S. Dentzel. Black cloth spine over decorated boards. Wear to bottom corners. Some scuffing to front and back covers. "With the bookplate of Bruce Bryan, the noted author and long time curator of the Southwest Museum of The American Indians in Pasadena, California". Long Inscription to Kitty and Bruce Bryan by Dentzel. Pinart was a French historian and member of the Société de Geographie who traveled Alaska and the American West making observations and collecting documentary information. In good condition. (Inventory #: 11210)
$50.00 add to cart or Buy Direct from
Eric Chaim Kline Bookseller
Share this item