The Annual Register, or a View of the History, Politics, and Literature, for the Year 1777 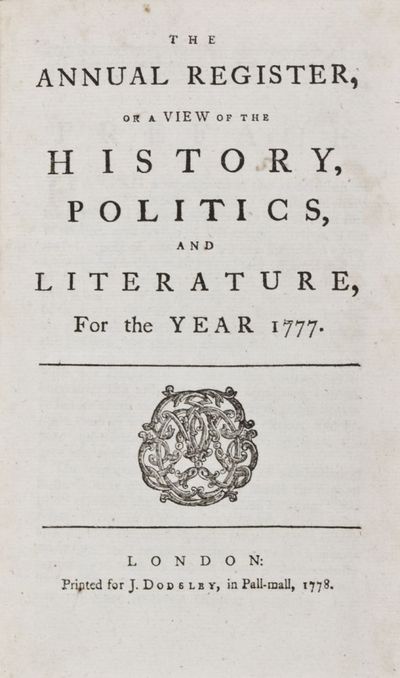 by Burke, Edmund
London: J. Dodsley, 1778. First edition. Hardcover. vg. Octavo. 303,249,[10],pp. Contemporary three-quarter calf over marbled paper covered boards with gold lettering and ruling on spine. Publisher's logo on title page. This important volume (the 20th volume of The Annual Register since its creation in 1758) includes, within the 'History' section, a remarkable 'Retrospective view of American Affairs in the year 1776', plus detailed accounts of key episodes within the War of Independence including 'State of the American Force', 'General Lee Taken', 'Critical State of Pennsylvania,' 'Washington attacks Col.Mawhood near Princetown,' 'Americans over-run the Jerseys,' 'British forces keep Brunswick and Amboy,' and 'Indian War.' The 'Chronicle' section reprints correspondence between Lord Howe and Dr.Franklin and the 'State Papers' includes John Hancock's 'American Oath of Allegiance'. Among the literary and scientific articles are 'Extracts from the Life of David Hume.' 'Account of the Savage Tribes of America' (Robertson), Extracts from Cook's Voyage including the existence of a southern continent, and an account of poisonous fish in the South Seas, extracts from Evelyn's Sylva, 'On the Origin of the Name of Old Nick', Poems by Dr.Johnson, Garrick and Sheridan, plus book reviews of Robertson's "History of America," and Capt. Cook's "Voyage to the South Pole." Rubbing to parts of leather and edges. Wear to corners. Ex-libris of John F. Richards on inside of front board. Slight water staining on upper right corner from page 191 to page 208 not affecting text. An invaluable account of American history of the time. Tight copy with binding in overall very good, interior in near fine condition. Rare in this binding. The Annual Register is a long established work, written and published each year, recording and analysing the year's major events, developments and trends throughout the year. It was created in 1758 by the publishers James and Robert Dodsley and was first written under the editorship of Edmund Burke. (Inventory #: 17577)
$650.00 add to cart or Buy Direct from
Eric Chaim Kline Bookseller
Share this item