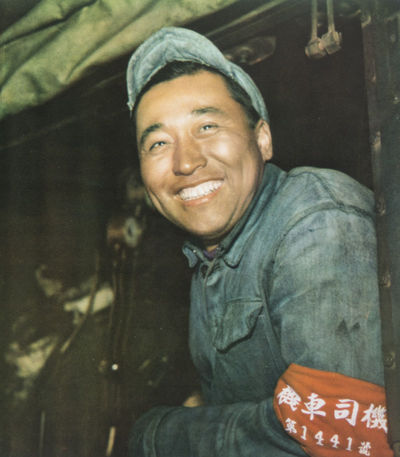 by n/a
NP, 1962. Softcover. g to vg+. Small quarto. Original yellow wrappers, with black lettering on the front cover and spine. Some creasing, scuffing and discoloration to wraps. Interesting selection from photographs used over a ten year period in "China Reconstructs", illustrating life in the "new China" and her advances. Profusely illustrated throughout with countless beautiful photogravures in b/w as well as some high quality offset reproductions in color (some tipped in) including a 25.5x7" three-page fold out of an anniversary celebration in Tiananmen Square. Following Mao's proclaiming the foundation of the People's Republic of China (PRC) in 1949, a series of movements and campaigns were launched under Mao's direction including the "First Five-year Plan" (1953-1957) which focused on economic industrialization and "Great Leap Forward" (1958-1962), which aimed to transform the country from an agrarian economy to a socialist society through rapid industrialization and collectivization, particularly in grain and steel production. The photo album showcases and glorifies the success of the revolution and subsequent effort to remake Chinese society, economy and culture, featuring portraits of workers, artisans, farmers and athletes, urbanized constructions and industrial factories, as well as art works from well-known artists at that time such as, Qian Song Yan and Wu Fan. The last page of album features a group photo of Mao with the foreign visitors, with a caption reading, "We have friends all over the world: Chairman Mao Tse-tung with guests from Asia, Africa and Latin America." Wrappers with some light chipping at the head and tail of the spine, light rubbing to corners, and some small closed tears and creases along the right side of the back cover. Interior with minor sunning to pages, and some light creasing to the bottom corners of pages. Wrappers in good, interior in very good+ condition overall. (Inventory #: 15472)
$450.00 add to cart or Buy Direct from
Eric Chaim Kline Bookseller
Share this item