Bowles' Practice of Perspective: Or An Easy Method of Representing Natural Objects According to the Rules of Art. Applied and exemplified in all the variety of cases; as landscapes, gardens, buildings, of divers kinds, their appendages, parts, and furniture. .. 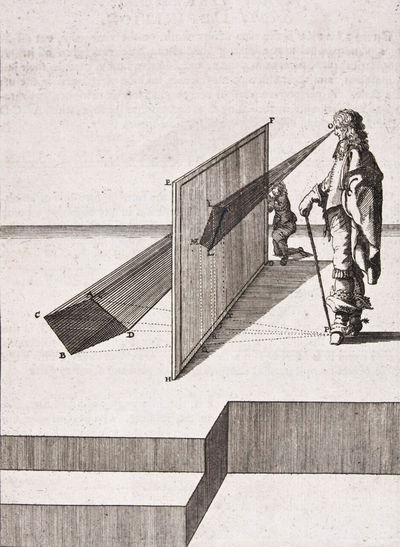 by Dubreuil, Jean
London: Carington Bowles, 1782. 6th edition. Hardcover. vg. 4to. xvi, xvi, 150 pp. Rebacked in leather retaining original mottled calf boards with gold borders, black leather label with gold lettering. 150 copper plates, (1). " ...With rules for the proportion and position of figures, both in draught and relievo. Also the manner of conducting the shadows, produced either by Natural or artificial luminaries; and practical methods of drawing after nature, when the process of rules are not understood. A work highly necessary for Painters, engravers, architects, embroiderers, statuaries, jewellers, tapestry-workers, and others concerned in designing." Originally written in French by a Jesuit of Paris. One of the most influential work of the seventeenth and eighteenth centuries on perspective written for the layman. Also known as the "Jesuit's Perspective," it was first published in French in 1642. The work was widely read in colonial America and remained a standard text for over a hundred years. Translated by E. Chambers. Plates 125-129 in Part IV are incorrectly marked for Part V. An important work on types and applications of visual and graphical perspective including an essay on theory by James Hodgson. Age wear, scuffing and some staining on binding. Reinforced with white binders taps along gutter on front and rear endpapers. Very good condition. (Inventory #: 22713)
$650.00 add to cart or Buy Direct from
Eric Chaim Kline Bookseller
Share this item