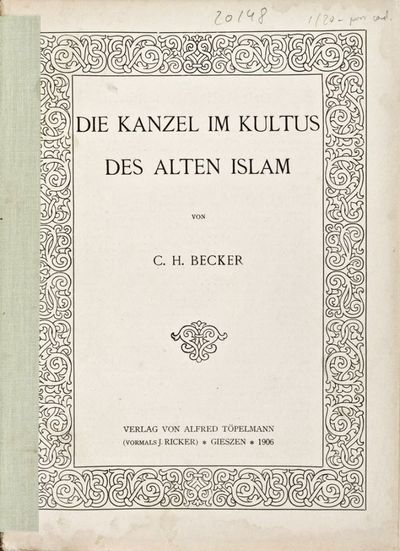 by Becker, C. H.
Gieszen: Verlag von Alfred Töppelmann (vormals J. Ricker), 1906. Hardcover. vg. Large 8vo. 21pp. followed by 10-page catalog of other works by same publisher. 1/2 cloth over stiff cardboard with handwritten title in black at spine. Original illustrated wrappers taped to inside of cardboard with gray binders tape. Pages unopened. Offprint ["Sonderabdruck"] of an article that was printed in the academic magazine "Orientalische Studien" (the Festschrift - Edition on occasion of Theodor Nöldecke's 70th birthday, published the same year), with the original pagination (pp. 331ff.) kept on top of page [original pagination on top left, new pagination on top right of each page]. Errata page following title, preceding text. Work on early Islam. Written by renowned German Orientalist and scholar of Islam, Carl Heinrich Becker (see below). Slight age-toning along edges of binding. Lower corner of pages slightly bumped throughout. Binding in overall good+, interior in good+ to very good condition. On the author (Source: Public Domain): Carl Heinrich Becker(1876 - 1933). Acclaimed German Orientalist, who was also minister of education and culture in the state of Prussia. Becker, who received his doctorate in 1899 and was granted the title of Professor in 1906, was Professor of History and Culture of the Orient at the Kolonialinstitut and Director of the Seminar for History and Culture of the Orient in Hamburg. In 1910 he took over the editorship of the renowned academic journal for the culture and history of the Islamic orient, "Der Islam". After moving to Bonn in 1913, he became Professor of Oriental Philology. During WWI, Becker began his work with the Prussian Ministry of Culture. He was promoted to State Secretary after the war. Later he became Prussian Minister for Science, Art, and People's Education. He died in Berlin. (Inventory #: 20148)
$125.00 add to cart or Buy Direct from
Eric Chaim Kline Bookseller
Share this item