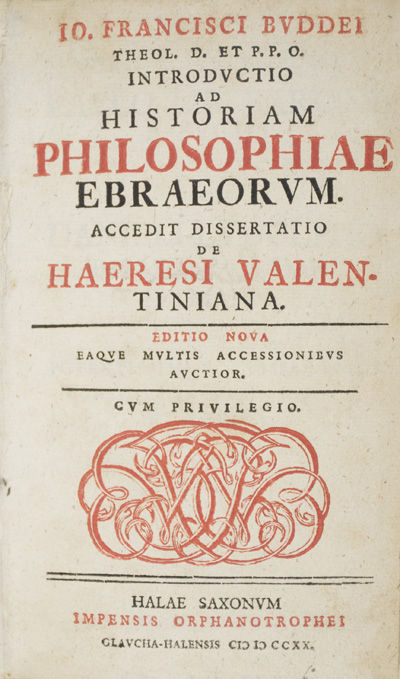 by Buddeus, Johannes Franciscus
Halae Saxonum: Impensis Orphanotrophei Glavcha-Halensis, 1720. Editio Nova (Revised Edtion). Hardcover. vg. 8vo. [28], 736pp, [20]. Contemporary vellum with black lettering to spine. Corners slightly bumped. Title page in red and black lettering. Woodcut title vignette, initials, head- and tailpieces. Includes index at end and 3 illustrations depicting kabbalistic motives (i.e. of Jewish mysticism): 1) p. 337: The 10 Sephirot [Sephiroth (or "enumerations"), in the Kabbalah of Judaism, are the ten attributes that God (who is referred to as Or Ain Soph, "limitless light") created through which he can project himself to the universe and man. These emanations manifest not only in the physical part of the universe, but also in the metaphysical one.] 2) p. 347: A different plate that deals with Sephirot. In this case, it combines (as the Latin caption mentions) Lurianic (i.e. by Isaac Lurie a.k.a. the "Ari", one of the main proponents of Kabbalistic [Jewish mysticism] thought) thought with Zoroastrian (a Persian pre-Muslim religion). 3) p. 382: An image of Or Ain Soph, "limitless light". Minor bowing, some suffing and staining to boards.In Latin. In near fine condition. About the author (From the Encyclopedia Britannica, 11th edition (1911), Volume V04, Page 737): Johann Franz Buddeus (1667 - 1729), German Lutheran divine, was born at Anklam, a town of Pomerania, where his father was pastor. He studied with great distinction at Greifswald and at Wittenberg, and having made a special study of languages, theology and history, was appointed professor of Greek and Latin at Coburg in 1692, professor of moral philosophy in the university of Halle in 1693, and in 1705 professor of theology at Jena. Here he was held in high esteem, and in 1715 became Primarius of his faculty and member of the Consistory. His principal works are: • Leipzig allgemeines historisches Lexikon (Leipzig, 1709 ff.) • Historia Ecclesiastica Veteris Testamenti (4 vols, Halle, 1709) • Elementa Philosophiae Practicae, Instrumentalis, et Theoreticae (3 vols, 1697) • Selecta Juris Naturae et Gentium (Halle, 1704) • Miscellanea Sacra (5 vols, Jeria, 1727) • Isagoge Historico-Theologica ad Theologiam Universam, singulasque ejus partes (2 vols, 1727). (Inventory #: 8347)
$1,250.00 add to cart or Buy Direct from
Eric Chaim Kline Bookseller
Share this item