International Office and Family Atlas of the World 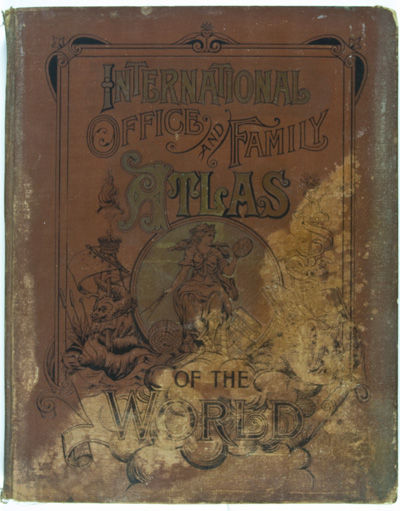 by n/a
San Francisco: A. L. Bancroft & Company, 1891. Grand New Census Edition. Hardcover. fair. Folio. 309pp. Illustrated sienna cloth with black and gold lettering on cover. Decorated endpapers. Late 19th century world atlas profusely illustrated with color maps (many of American cities), charts & diagrams. From title-page: "International Office and Family Atlas of the World containing Newly Engraved Maps on Large Scale of all the States and Territories, the Leading Cities of the United States, all Foreign Countries and Divisions of the World, Many Miscellaneous Maps of an Interesting Character, together with Useful and Instructive Charts and Diagrams, Reference Tables of History, Finance, Agriculture, Commerce, Education, Mining, Manufacturing and Politics." Heavy water staining and some age wear on binding. Head and tail of spine and parts of edges frayed. Some staining and discoloration on front and rear endpapers. Hinges starting. Slight age toning to outer edges of some interior pages. Binding in poor, interior in very good condition. (Inventory #: 21785)
$175.00 add to cart or Buy Direct from
Eric Chaim Kline Bookseller
Share this item