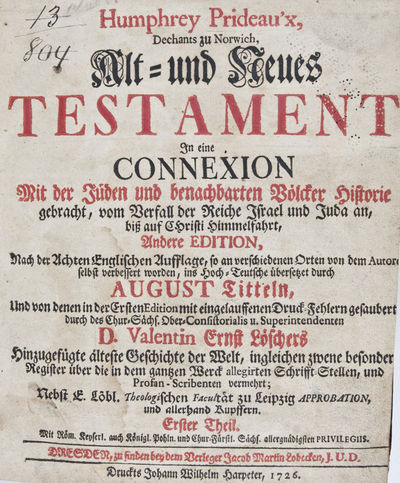 by Prideaux, Humphrey
Dresden: Druckts Johann Wilhelm Harpeter, 1726. Hardcover. fair. 2 volumes. 8vo. (16) 724 (32)pp. (19) 808pp. 3/4 leather over marbled boards with gold lettering to spine. Raised bands. Some wear to corners and alongside spine. Front cover of both volumes starting to split at hinges, but holding. Browning to some pages. Ex-library mark to inside of front boards (both volumes). Copper plate engraved frontispiece to vol. 1. Two-page copper plate engraved frontispiece to vol. 2. Title pages in red and black lettering. Magnificently illustrated with 7 copper engravings (including frontispieces), 2 of them fold-out and 3 of them 2-page. In German. Fair to good condition.

Humphrey Prideaux (1648-1724), divine and scholar, belonged to an ancient Cornish family, was born at Padstow, and educated at Westminster School and at Oxford.
He first attracted notice by his description of the Arundel Marbles (1676), which gained for him powerful patrons, and he rose to be Dean of Norwich. Among his other works are a Life of Mahomet (1697), and The Old and New Testament connected in the History of the Jews and Neighbouring Nations (1715-17), long an important work, of which many editions were brought out. (Inventory #: 8362)
$500.00 add to cart or Buy Direct from
Eric Chaim Kline Bookseller
Share this item