AN ABRIDGMENT OF THE HISTORY OF NEW ENGLAND; for the use of young persons, now introduced into the principle schools in this town 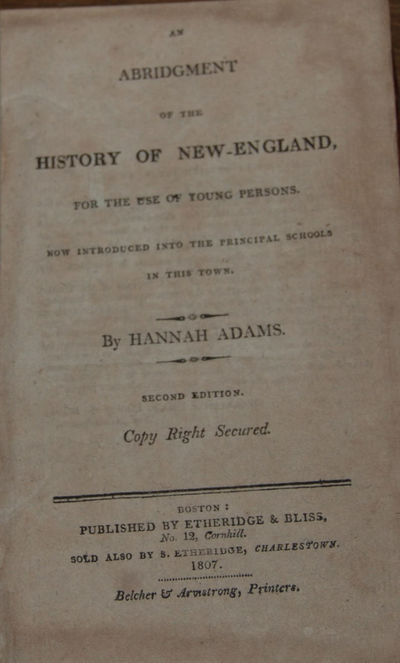 by ADAMS, Hannah
Boston: Etheridge & Bliss, 1807. Second edn. 8vo, 188pp, Bound in contemporary calf with chipped leather label, leaves toned but a very good copy. Sabin 207; Imprints 11931. "Hannah Adams (1755-1831), compiler of historical data, the first American woman who sought to support herself by her pen, is remembered also as one of the principals in a controversy with the geographer Jedidiah Morse which embittered relations between liberals and orthodox in the Unitarian controversy within the congregational churches of Massachusetts... " She wrote her Summary History of New England in 1799"[NAW]. The Morse/Adams controversy raged for almost 10 years and concerned competing school history books but also had to do with Morse's conservative Calvinism versus Adams' liberal sympathies. Blain notes: A history by Dr. Jedidiah Morse, 1804, being poised to damage both her Summary History of New England (1799) and a projected abridgement for `young persons' (pub. 1805), she said so, and the quarrel smoldered on into mutual printed accusation in 1814. (Inventory #: 44815)
$165.00 add to cart or Buy Direct from
Second Life Books
Share this item

London : Edward Churton , 1834
(click for more details about MEMORIS OF CELEBRATED WOMEN OF ALL COUNTRIES; with portraits by the most eminent masters)
View all from this seller>