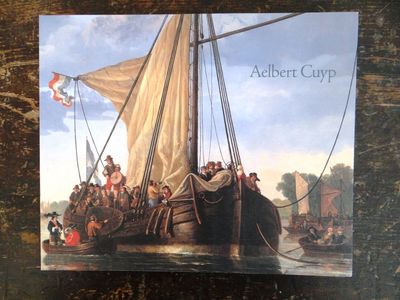 by Wheelock, Arthur K. Jr. et al.
Washington, DC / London: National Gallery of Art / Thames & Hudson, 2001. Softcover. VG. Color illus. wraps; French flaps, 320 pp.; 95 bw and 130 color plates. Contents as follows: Aelbert Cuyp and the depiction of the Dutch arcadia / Arthur K. Wheelock Jr., Jacob M. de Groot -- Aristocratic imaginings: Aelbert Cuyp's patrons and collectors / Alan Chong -- Cuyp's horsemen: what do costumes tell us? / Emilie E.S. Gordenker -- Pigments and color change in the paintings of Aelbert Cuyp / Marika Spring -- The beauty of Holland: Aelbert Cuyp as landscape draftsman / Egbert Haverkamp Begemann. "Forty-five of Cuyp's most distinguished paintings and sixty-four drawings are reproduced here in brilliant color, accompanied by more than 100 comparative illustrations. Their appeal lies not only in the subject matter but also in their distinctive style, for Cuyp infused his arcadian subjects and river views with a sensitivity to light and a clarity of form that is firmly grounded in reality." "Published to accompany an international touring exhibition, the book features insightful essays by an international team of curators and scholars that discuss Cuyp's work in the context of his time, personal background, artistic development, patrons, use of costume, and artistic techniques."--Jacket. Catalogue features 109 works. (Inventory #: 117234)
$29.97 add to cart or Buy Direct from Mullen Books
Share this item