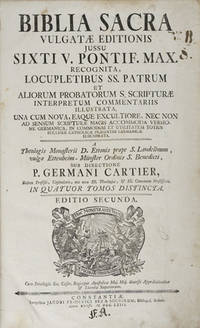 by Cartier, Germani
Constance: Jacobi Friderici Bez & Sociorum, 1763. Second edition. Hardcover. fair to vg. Folio. [24], 758, 562, 588,12, 571, 48, [48]pp. Original full calf with blind-stamped borders on boards and gold lettering on spines. Raised bands. All edges red. Printer's device on title-page of first volume. Decorative head- and tailpieces. Priest at the Benedictine monastery in Ettingheimmunster, where he headed a team to achieve a Bible translation in understandable German, Cartier died before the completion of the work, in 1749. The first edition of the Ettingheimmunster Bible was published post mortem 2 years later (1751).The team worked 10 years on the Bible translation. Its uniqueness is not only the clear German, but also the division: Whereas Biblia Vulgatae (standard Catholic Bibles) are normally divided into three parts, this Biblia is divided into four parts:1) From Genesis to Chronicles.2) From Ezra to Ben Sirah.3) Prophets and Maccabees.4) New Testament. Contains also a "syllabus" of different Bible editions, Church fathers and exegetes as well as a dissertation on the topic of the earthly paradise.Another sign of its uniqueness is the inclusion of Latin commentaries from Church fathers and contemporary exegetes. Furthermore, the attempt to deliver a clear and understandable German was a clear focus point of the group (and one of the reason why it took so long). It specifically attempts to improve a German that Dietenberger's and Ulenberg's translations had lacked. However, the aim was to still be as close as possible to the Semitic language character of the source. The second edition [our copy] was published in 1763 and has different illustrations than the first edition. Includes numerous full-page copper engravings in elaborate baroque frames. Edge wear on bindings with front joint of first volume cracked, but cover still holding. Heavy rubbing on boards, spines and corners. Heads and tails of spines chipped and worn. Some worming on spine of second volume (not affecting pages). Previous owner's stamp on half title and title-pages. Hole on half title-page and on title-page of first volume (without affecting text). Minor foxing/browning throughout. Text in German, gothic script and Latin. Bindings in overall poor to fair, interior in good+ to very good condition. (Inventory #: 18822)
$950.00 add to cart or Buy Direct from
Eric Chaim Kline Bookseller
Share this item