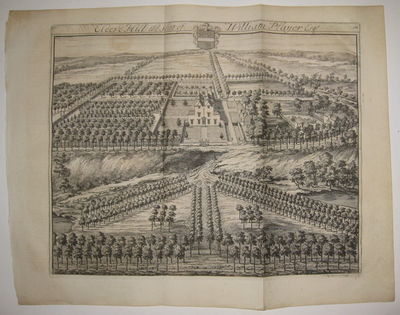 by KIP, Johannes
London. unbound. very good. Leonard Knyff. View. Uncolored copper plate engraving. Page measures 16 1/8" x 21", plate measures 13.75" x 17". Beautifully detailed garden landscape, circa 1708. Johannes Kip (1653-1722) was a Dutch draughtsman, engraver, and print dealer who accompanied the court of William of Orange to England following the Glorious Revolution of 1688. He settled in Westminster where besides having a thriving print selling business, he worked for various London publishers producing engravings. This print was published in "Britannia Illustrata or Views of Several of the Queen's Palaces, also of the Principal seats of the Nobility and Gentry of Great Britain", which is among the most important English topographical publications of the eighteenth century. These are very detailed depictions of the buildings, orchards, gardens, etc. of the English countryside. Leonard Knyff (1650-1721) was a Dutch draughtsman and painter who was one of the many artists who collaborated with Johannes Kip. Printed on early eighteenth century hand-made, laid paper with two vertical center folds, as issued. Minor toning in left corners, small tear to bottom edge. (Inventory #: 215320)
$450.00 add to cart or Buy Direct from
Argosy Book Store
Share this item