The Characters. Newly rendered into English 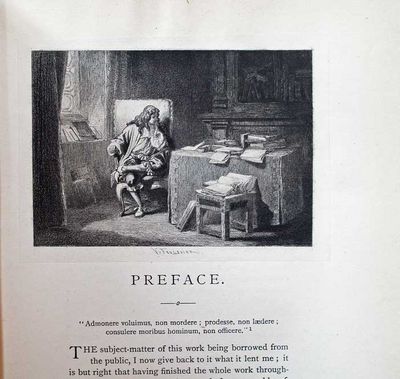 by La Bruyère, Jean; Henri Van Laun, trans.
New York and London: Scribner & Welford; John C. Nimmo, 1885. First edition of this translation; limited to 200 copies in the US and 300 in Great Britain.. Acceptable/Google found the rave review that appeared in the Daily Telegraph when this book came out. Let the last line stand in for the entire review: "Six portraits specially etched by M. Damman, a series of lovely headpieces etched by M. Foulquier, and a portrait of La Bruyere by the same artist, render the book one of the most sumptuous issued from the English press." . Octavo (23 cm); 3 preliminary leaves, [9]-31, v, [7]-494 pages. Engraved frontispiece portrait of La Bruyere, six additional engraved portraits by Benjamin Damman of Montaigne, Descartes, Le Brun, Louis XIV, William III, and Bossuet. Fifteen (of sixteen) vignette headpieces engraved on tissue by Valentine Foulquier and mounted at chapter titles (lacks "Of the Affections," apparently left out in manufacture and not caught by the quality control department). Bound in original quarter cream vellum over green cloth, stamped in gilt. Corners rubbed; upper joint splitting near crown; gilt images on vellum spine rubbed away. (Inventory #: 4981)
$80.00 add to cart Available from
Rodger Friedman Rare Book Studio
Share this item
Rodger Friedman Rare Book Studio
Offered by

The book of the dead. Facsimile of the Papyrus of Ani in the British Museum

London : Printed by order of the Trustees, sold at the British Museum, , 1894
(click for more details)