Palaeontological memoirs and notes of the late Hugh Falconer 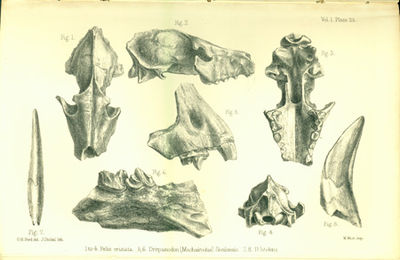 by Falconer, Hugh
London: Hardwicke, 1868. Falconer, Hugh (1808-65). Palaeontological memoirs and notes of the late Hugh Falconer, A.M., M.D. . . . Compiled and edited by Charles Murchison, M.D., F.R.S. 2 vols. Vol. I: lvi, 590pp. 34 plates, text illustrations. Vol. II: xiii, [77], 675pp. 38 plates, text illustrations. 215 140 mm. London: Robert Hardwicke, 1868. Modern quarter morocco, marbled boards. Library stamps on verso of title pages of both volumes, and small stamp on the title of Vol. II. Marginal repairs to frontispiece and first 7 leaves of Vol. I, a few pencil marks in the margins, light toning, but very good. First Edition of the collected paleontological works, both published and previously unpublished, of the Scottish geologist and botanist Hugh Falconer, whose extensive studies of India's fossil mammals earned him and his colleague Proby Cautley the London Geological Society's prestigious Wollaston Medal. Falconer became interested in paleontology while stationed in India as an employee of the British East India Company. In the early 1830s he discovered the Siwalik fossil beds in the southernmost part of the Himalayas, where he and Cautley excavated an enormous variety of now-extinct specimens, including the mastodon, sivatherium, saber-toothed tiger and the giant tortoise Colossochelys Atlas. Falconer's observations of the evolutionary history preserved in the Siwalik strata--long periods of stasis followed by short periods of rapid change--led him to introduce the evolutionary theory known as punctuated equilibrium, a theory further developed in the twentieth century by Niles Eldredge and Stephen Jay Gould. Upon his retirement and return to London in 1855 Falconer devoted all of his time to paleontological and geological pursuits, and became involved in the question of the antiquity of man. Together with Pengelly, Falconer was one of the first two scientists to visit Brixham Cave after its discovery in 1858, and he was instrumental in obtaining the necessary funding and scientific personnel for its excavation. Falconer's letter of 10 May 1858 to the Geological Society informing them of the Brixham Cave site is included in Volume II of the Palaeontological Memoirs, together with his report on the results of the cave excavations delivered on 9 September. We have not been able to find any evidence that this letter and report were published prior to their inclusion in the Palaeontological Memoirs. The excavation of Brixham Cave culminated in what Falconer's biographer Charles Murchison called "the great and sudden revolution in modern opinion, respecting the probable existence at a former period of man and many extinct mammalia" (p. 486). Falconer left a large portion of his paleontological researches unpublished on his death, while many of his earlier papers had appeared only in such hard-to-find periodicals such as the Journal of the Asiatic Society of Bengal. The present collection brings together all of Falconer's memoirs on paleontology, with the first volume containing his work on the fossil zoology of the Siwalik formations and the second his later paleontological researches, including his investigations on the antiquity of man and his important memoir on the fossil rhinoceros, published here for the first time. This set is rare and very difficult to find. Dictionary of Scientific Biography. . (Inventory #: 40957)
$3,000.00 add to cart or Buy Direct from
Jeremy Norman & Co.
Share this item
Jeremy Norman & Co., Inc.
Offered by