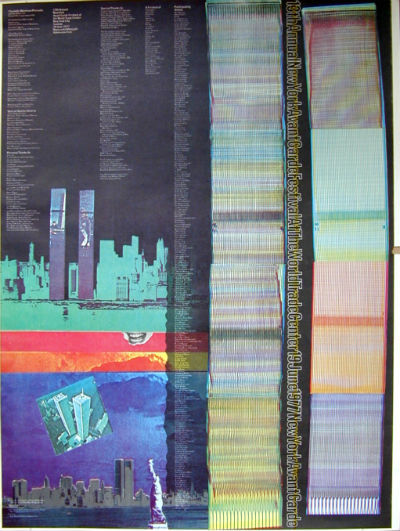 by Moorman, Charlotte (1933-1991), organizer; McWilliams, Jim (1937- ), poster designer (from 1966)
Between 1963 and 1980 the cellist and performance artist Charlotte Moorman (known mostly for her work with Nam June Paik) organized fifteen increasingly elaborate festivals featuring a wide variety of performances in various locations. The first three were at Judson Hall, a small recital hall across from Carnegie Hall (not to be confused with Judson Memorial Church in Greenwich Village). Number 4 was in Central Park. Number 5 took over a Staten Island ferry. Number 6 paraded down Central Park West. The 7th was on two islands in the East River, the 8th, at the Lexington Avenue Armory. Festival number 9 occupied a vintage riverboat docked at South Street Seaport. Number 10 took place in Penn Central boxcars on a track at Grand Central Station. Number 11 was at Shea Stadium; number 12, at Floyd Bennett Field at Gateway National Park in Brooklyn. The World Trade Center was the site of the 13th. Number 14 took place on the Charles River in Cambridge. The final number 15 was at the Passenger Ship Terminal on the Hudson River. **By number 11 (1974) the casts and acknowledgments had grown to the length of movie credits. Among the many hundreds of performers were John Cage, David Tudor, Allan Kaprow, Nam June Paik, Yoko Ono, Allen Ginsberg, Ray Johnson, Joseph Beuys, John Lennon, Max Neuhaus, Yvonne Rainer, Laurie Anderson, Ornette Coleman, Geoff Hendricks, Shirley Clarke, Bob Watts, James Tenney, Meredith Monk, and Al Hansen. **For each of these festivals Charlotte Moorman published a poster; there were two versions each of numbers 1, 2, 8, and 9, for a total of nineteen. She designed the simple first three herself; number four was a collaboration with Jim McWiliams; the remaining eleven were his work. Like the festivals, the posters became larger and increasingly elaborate, with images and text in layers. Number 11 is a riot of color featuring multiple aerial views of Shea Stadium. Number 13 shows the Twin Towers from different views. If number 11 was a riot of color, number 14 is full-fledged revolution. The sequence ends with a 20-color extravaganza. **A few complete sets remain available of approximately 50 that could be assembled from Charlotte Moorman's estate. Numbers 1, 2, 8, and 9 appear in two versions. Please write or call for a complete descriptive list. Some posters also are available singly. Nearly all of these posters that might appear on the current market were folded and mailed. All of these are flat, uncreased, and unmailed, except 2b, 3, and both number 8s. Those four were folded but are unmarked and have been stored flat. Sizes range from 8-1/2 x 5-1/2 inches to 36 x 24 inches. Sets will be shipped in tubes. (Inventory #: 50601)
$1,000.00 add to cart or Buy Direct from
Laurence McGilvery
Share this item

Free shipping on most items with order direct to www.mcgilvery.com. Please see descriptions of individual books.We pack with care.30 day return guarantee, with full refund, if an item arrives misdescribed or damaged. Return shipment must arrive in the same condition as originally sent.
More from this seller

[Pasadena, California: the artist: 1977]
(click for more details about Bodies: more than 19,476 combinations)

Los Angeles Project: Goddess Project, [1988?]
(click for more details about The nine muses (poster))
View all from this seller>