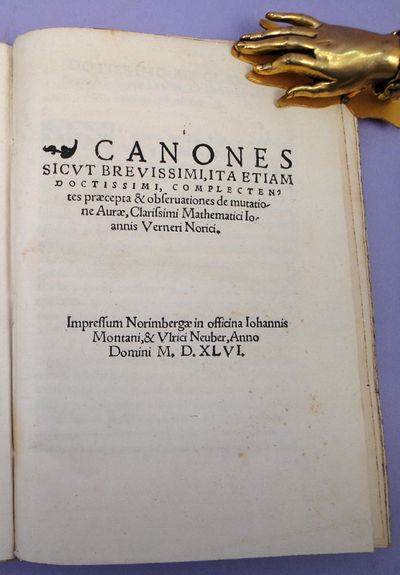 by Werner, Johann
Nuremberg: J. Montanus & U. Neuber, 1546. Pioneering Work on Environmental Science and Meteorology Werner, Johann (1468-1522). Canones sicut brevissimi, ita etiam doctissimi, complectentes praecepta & observationes de mutatione aurae . . . 4to. [20]ff., last leaf blank. 2 woodcut initials. Nuremberg: J. Montanus & U. Neuber, 1546. 202 x 142 mm. Modern vellum. Minor soiling on verso of last leaf, otherwise fine. Manuscript annotations in an early hand, titled "Aphorismi Astrologiae," on recto of last leaf. First Edition of one of the rarest works by the mathematician and astronomer Johann Werner, and a pioneering contribution to environmental science in the height of the scientific revolution. Werner, a priest in Nuremberg, made notable contributions to astronomy, mathematics and geography. He invented instruments for solving problems in spherical astronomy and for determining the latitudes of planets, and his work on spherical triangles (not published until 1907) was superior to that of Regiomontanus in its presentation and practical applicability. He also developed the first method for determining latitude and longitude simultaneously. Werner was the first to make regular observations of weather conditions in Germany; together with Tycho Brahe, he pioneered the practice of collecting meteorological data for scientific purposes. "In meteorology Werner paved the way for a scientific interpretation. Meteorology and astrology were connected, but he nevertheless attempted to explain this science rationally. . . . The 'guidelines that explain the principles and observations of the changes in the atmosphere,' published [posthumously] in 1546 by Johann Schöner, contain meteorological notes for 1513-1520. The weather observations are based mainly on stellar constellations, and hence the course of the moon is of less importance. Although Werner did not collect the data systematically, as Tycho Brahe did, he attempted to incorporate meteorology into physics and to take into consideration the geographical situation of the observational site. Thus he can be regarded as a pioneer of modern meteorology and weather forecasting" (Dictionary of Scientific Biography). This pamphlet by Werner is very rare, with only three copies in the United States cited in OCLC (UC San Diego, Yale, U. Michigan). Our copy appears to be the first on the market since the Honeyman copy sold in 1981. 40981 . (Inventory #: 40981)
$9,500.00 add to cart or Buy Direct from
Jeremy Norman & Co.
Share this item
Jeremy Norman & Co., Inc.
Offered by