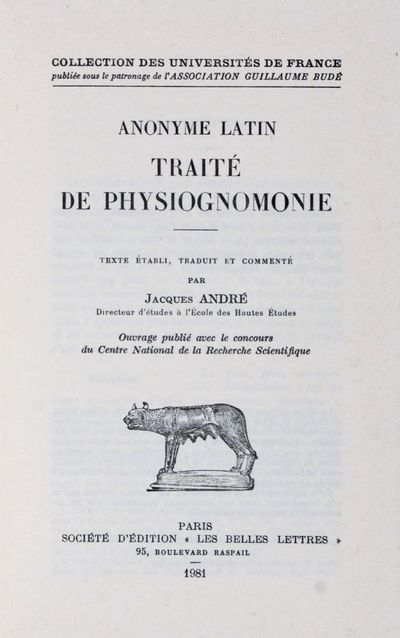 by Anonyme Latin; Jacques André (Texte établi, traduit et commenté par)
Paris: Société d'Edition "Les Belles Lettres, 1981. Hardcover. vg. Octavo. 154, [2]pp. Original orange cloth with black lettering on front cover and spine, and printer's device on front and back cover. Printer's device on title-page. Fascinating work, being one of the first treatises on Physiognomy: method based on the idea that the observation of a person's physical appearance, and mainly the features of his face , can give an insight into his character or his personality. Text in French and Latin. Binding and interior in overall very good condition. (Inventory #: 26286)
$65.00 add to cart or Buy Direct from
Eric Chaim Kline Bookseller
Share this item