The Crayon Miscellany No. 2 Containing Abbotsford and Newstead Abbey 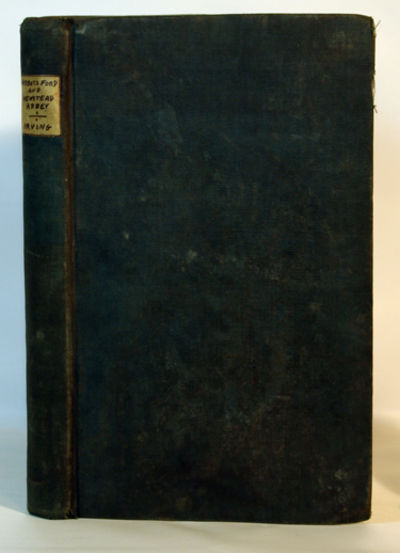 by (Washington Irving)
Philadelphia: Carey, Lea and Blanchard, 1835. First Editio. First printing Very good- in the publisher's original green cloth covered boards with a new, reproducction of the original paper label on the spine. A 12mo measuring 7" tall by 4 1/4" deep. The cloth at the head and heel of the spine has two short closed tears at the corners and the cloth is worn through at the tips of the boards as well as a 1/3" long area about 1/2" done the front board on its fore edge. The recto side of the last free end page contains illegible notes in ink in an early hand. The second (blank) free end page has been removed. There is a mild water stain on the front paste down which leached onto the margins of the preliminaries to the title page and an early prior owner's name in ink on the verso of the first free end paper . 230 pages of text followed by a blank leaf and 36 pages of ads from the publisher and one final blank leaf. The Crayon Miscellany No. 1 contained A Tour On The Prairies and was published by Carey, Lea, & Blanchard on April 11, 1835. This volume, No. 2 of The Crayon Miscellany, was published six weeks later, on May 30, 1835. Reportedly, only 5,000 copies were printed. The contents are "Irving's fond tribute to the homes of Walter Scott and Lord Byron." (Brian Jay Jones: Washington Irving An American Original.) It was well received by an adoring American public even winning fond praise from Edgar Allan Poe in his review which appeared in the Southern Literary Messenger. The British publication of nearly the same text preceded the American edition by roughly one month. (Langford/Blackburn p. 33; BAL 10142) A highly collectible copy with strong joints and hinges. (Inventory #: TB23617)
$150.00 add to cart Available from
Town's End Books
Share this item

Franklin Center : The Franklin Library , 1977
(click for more details about The Federalist)
View all from this seller>