MONDI CELESTI TERRESTRI, & INFERNALI...; [ed. by B. Macchietta]. 2 parts in 1, each with its own title page 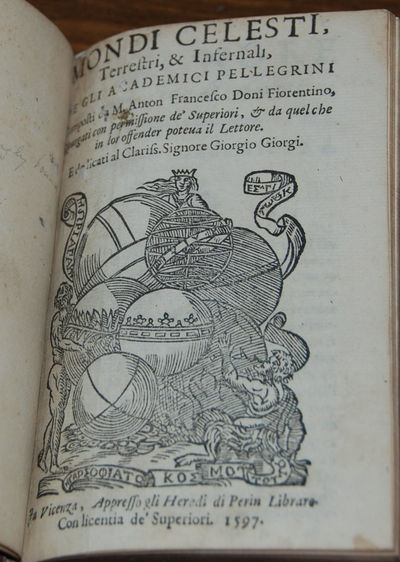 by DONI, Antonio Francesco
Vicenza: Gli Heredi di Perin (at the Press of Georgio Greco), 1597. First Edition issued in 1562. Sm. 8vo. (16),431,(15)pp. Large printer's device on the verso of a preliminary leaf and at the back of the second part. Woodcut portrait of the author on the title of the second part. 19th century red morocco, hinges repaired. A.e.g. The first gathering is complete but misbound, a few small scrapes on the title page. Adams D828. Scarce later 16th century edition of Doni's interesting text "The Worlds." It describes seven "mondi" and seven imaginary "inferni". "The Sixth World", called both "The Mad World" and "The Wise World", is a utopia which in a general way echoes that of Sir Thomas More in which he portrayed a small country without property or laws. This is presumably the first instance of an Italian work influenced by an English work. Doni 1513-1574) was a priest, poet, polemicist, gossip and hermit. (Inventory #: 46754)
$1,210.00 add to cart or Buy Direct from
Second Life Books
Share this item

London : Fortey , 1845
(click for more details about A COPY OF A LOVE LETTER; written by a Old Gentleman to a Young Lady in this Neighborhood (signed O. C.) (with:) The Young Lady's Answer)
View all from this seller>