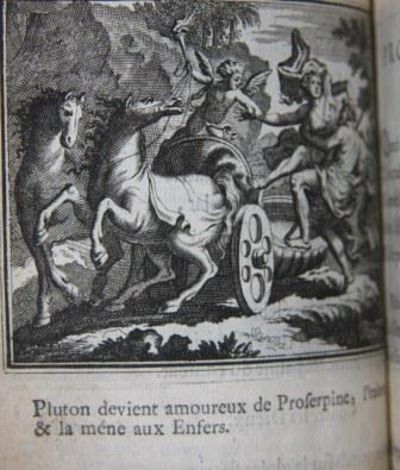 by Ovid
Amsterdam: Abraham Wolfgang, 1679. Full Calf. Very Good Minus. Le Clerc, Sebastien; Chauveau, Francois; Hagen, Christian; Le Brun, Charles (frontis). 12mo - over 6¾ - 7¾" tall. [11], 462, [4] pp. 227 illustrations, including frontis, which was designed by Charles Le Brun. There is an exquisite pictorial image, 2.5 by 3 inches (with one exception) to each generally 15 line verse recounting concisely one of the Metamorphoses immortal tales and/or character trasnformations. Verse is on facing pages and caption below illustration describes the scene of the picture in prose. This is a Dutch reprint of 1676 Metamorphoses published by Isaac Benserade in Paris, Imprimerie Royale. Brunet IV 288. This particular copy appears to have minor elements of a mixed state, with the frontis possibly being from the earlier Paris edition. Pages 165/166, 457/458, 459/460, and the last three leaves (which is the 6 page index, appear to come from another edition as well, with the likelihood that most of these leaves -- are from a later edition or the facsimile of another edition, given a slight difference in the paper stock, the number typography, etc. (The final leaf bears the date of 1676.) In total, thus, there are seven leaves which are probably not issued by Wolfgang in 1679, and these include the frontis and a single other image, that of Leda and the swan, the latter of which is smaller than the other text images which are uniformly approx. 2.5 by 3 inches. Light offsetting to the illustrations. Some light soilage scattered throughout. A few minor closed tears or margin losses. One page with old, rather clunky tape repair. A few other spots with more subtle or discreet Japanese tape repair. Imagery is always sharp and vivid. Binding itself is tight, and modern full leather with raised bands and understated tooling, plus title labels, make this an attractive and very good copy. (Inventory #: 001170)
$600.00 add to cart Available from
White Fox Rare Books & Antiques
Share this item
White Fox Rare Books and Antiques
Offered by