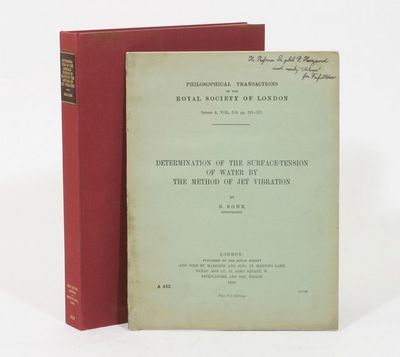 by Bohr, Niels
London: The Royal Society, 1909. 1st Edition. Soft cover. Fine. FIRST EDITION OFFPRINT, PRESENTATION COPY, of Bohr's first published scientific paper, written while he was a 20-year-old student at Copenhagen University. Inscribed by Bohr in Danish on front wrapper to Poul Heegaard, mathematician and professor at Copenhagen University. In original wrappers. In February 1905 the Royal Danish Academy of Sciences and Letters announced a prize concerning Lord Rayleigh's 1879 theory that the surface tension of liquids could be determined from the surface vibrations of liquid jets. The problem proposed by the Academy was to perform quantitative experiments to implement Rayleigh's method. Bohr faced formidable difficulties, not least the fact that, since the university had no physics laboratory, Bohr had to perform the experiments at night (to avoid perturbations due to passing traffic) in his father's physiology laboratory. Bohr's paper was submitted on the deadline of 30 October 1906, and on 23 February 1907 the Academy notified Bohr that he had won its gold medal. Bohr "included in his work essential improvements on Rayleigh's theory by taking into account the influence of the liquid's viscosity and of the ambient air, and by extending the earlier theory from infinitesimal to arbitrarily large amplitudes" (Pais 101). The original paper submitted to the Academy was, of course, written in Danish (it is actually in the hand of Niels's brother Harald). It survives in the Bohr Archives, but it was never published (Pais 102). Bohr submitted the present English translation to the Royal Society of London in 1908, where it was read and published the following year. As well as being his first published paper, this also represents the only experimental work published by Bohr; all of his subsequent contributions were to theoretical physics. (A. Pais, Niels Bohr's Times, 1991). The recipient, Poul Heegaard (1871-1948), is famous for his contributions to topology, especially the theory of three-dimensional manifolds. After his 1898 Copenhagen University dissertation, Heegaard taught at various military schools in the Copenhagen area before accepting a chair at Copenhagen University. After seven years there he resigned, but shortly afterwards he moved to the University of Kristiania (now Oslo) where he became a cofounder of the Norwegian Mathematical Society and a very popular teacher until he retired in 1941. Heegaard's dissertation is very well known because it gave a counter-example to the version of PoincarÃ©-duality published by PoincarÃ© shortly before, thereby contributing to the clarification of the basic notions of algebraic topology. He also co-wrote, with Max Dehn, the article 'Analysis Situs' for the Enzyklopadie der mathematischen Wissenschaften (1907), which marks the foundation of combinatorial topology. Offprint from: Philosophical Transactions of the Royal Society of London, Series A, Vol. 209. London: The Royal Society, 1909. Quarto, original green printed wrappers; custom box. A little soiling to wrappers, very small repairs to bottom corners of front wrapper. A remarkable well-preserved copy. RARE. (Inventory #: 309)
$9,400.00 add to cart or Buy Direct from
Manhattan Rare Book Company
Share this item