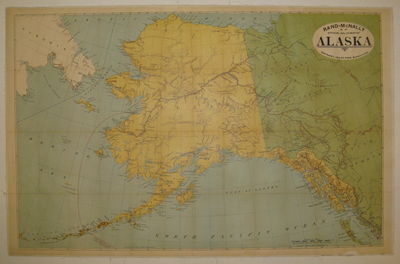 by RAND MCNALLY & CO
Rand, McNally & Co, 1897. unbound. very good. Map. Color lithograph backed on linen. Image measures 22 1/8" x 34.5". This scarce and important map of Alaska dating to 1897 was issued by Rand McNally and Company at the height of the Klondike Gold Rush. Map features all of Alaska and focuses on the routes to Dawson and the Gold Fields. Some of the earliest routes to the Klondike are noted, including from Calgary and Edmonton. Also notes the legendary Healy's Store - the first trading post at what is now called Dyea. Chilkoot Pass, the main entry point into the region at the time is labeled.The two primary routes, one up the Yukon River from the West and another from Seattle are also detailed. This bi-national route was by far the fastest way to the Klondike, but was initially caught up in political uncertainty.The Klondike Gold Rush (1896-99), one of the most sensational events of the fin de siÃ¨cle period, began when gold was fist discovered in the Klondike on August 16, 1896. At the time the region was part of Canada%u2019s Northwest Territory. The event quickly became a sensation with newspapers exaggerating the potential of the bonanza to be able to sell more copies.The region, one of the remotest corners of the continent would soon attract over 100,000 people. Of these only about 30,000 prospectors made it to the region near Dawson City and of these not over 4000 actually discovered gold.The map also shows in great detail geographical and topographical features, towns, routes and waterways. Minor wear along original folds, chip and small tear to lower edge. 1/2 inch repair over the Pacific Ocean over the lower border. Map is lined on linen.Rand McNally is an American publishing company specializing in maps, atlases and globes. Founded by William Rand in 1856, who hired Andrew McNally in 1858 to work in his shop. The two men formally established Rand McNally & Co. in 1868. The firm remains in business today. A beautiful example of this important and hard-to-find map. (Inventory #: 222514)
$450.00 add to cart or Buy Direct from
Argosy Book Store
Share this item