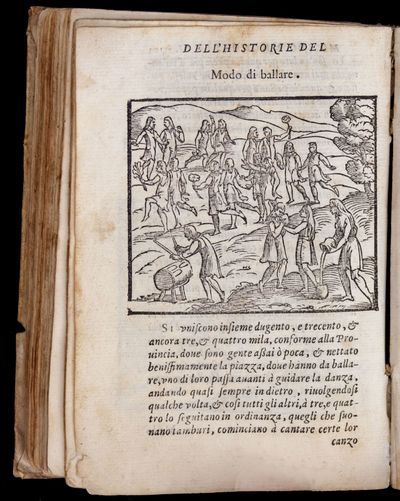 Scarce first complete edition (with 19 woodcuts) of the second printed work devoted to the customs of the American Indians illustrated from life. This edition is augmented with a section on the Canary Islands and an extra plate. Benzoni's is one of the earliest accounts of the European colonial establishment in America by a writer who was not Spanish, and the spirited woodcuts (all but one of which show Native Americans) were among the first to give Europeans images of Indians and their activities. Their ethnographic value has long been acknowledged, and they were the source for the De Bry engravings (see Item X).

The historical and ethical value of the work is also considerable: "Along with Las Casas' Brevissima relación de la destruyción de las Indias, the Historia is considered one of the two foundation stones of the Black Legend of Spanish cruelty to the Indian."

Benzoni (b. 1519), a native of Milan, came to the Caribbean as a young man in 1541 and visited the Greater Antilles, the Spanish Main, and Central America, thereafter sailing from Panama to Peru.