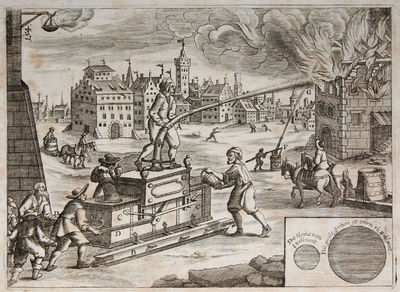 by BÖCKLER, Georg Andreas
Nuremberg: Paulus Fürsten, 1673. Hardcover. Very Good. Folio - over 12 - 15" tall. (Frontispiece dated 1661). Folio [33 x 21.5 cm], (6) ff., 44 pp., 154 numbered engraved plates. Bound in original blindstamped vellum over wooden boards, raised bands on spine, with title written in ink in an old hand, clasps and ties present. Some tiny wormholes in blank margin of engraved title and a few leaves; some minor handsoiling; small and light waterstain in upper margin of title and following leaves; typical toning and light browning seen in this volume, but rather less than usual; a few impressions of plates on the light side, or shaved with no loss to image. Generally a fresh copy with good strikes in a handsome original binding. Scarce second German edition and unusually fine copy, in its original blindstamped binding, of this supra-illustrated machinery book devoted to pumps, presses and milling machinery by the Nuremberg architect and engineer Böckler.The work contains a total of 154 full-page engraved plates, depicting a wide variety of mills, waterwheels, and grinding machines, including designs for water-driven perpetual-motion machines. The work is also unusual among Baroque machine books for primarily containing devices that had actually been realized-not simply the fantasies of inventors who could find a willing engraver.Machines described and pictured include paper mills; gunpowder mills; a fulling mill; a smithy with water-powered bellows; pipe boring mills; grinding apparatus for sharpening tools, knives and weapons; and windmills. The majority are grist mills and water-raising devices powered by water, animals, and humans, though other noteworthy examples include a roasting spit, a fire-engine, a pumping system for an outdoor fountain, a man-powered mill which is also a sort of circular stair-stepper, and a famous attempt at designing a perpetual motion machine. Many of the engravings are familiar because they were plagiarized in technology publications for the next hundred years.The work was first published in German in 1661, with a Latin translation following the next year. Several reprints of both followed, always with the same plates. Like most German books of the period, Böckler's books tend to brown, and this is one of the cleanest and freshest copies of his books we have ever encountered. * Graesse I.459; Hoover 142 (Latin); Singer, History of Technology III.16-17. (Inventory #: 2285)
$9,850.00 add to cart Available from Martayan Lan
Share this item
Martayan Lan, Inc.
Offered by