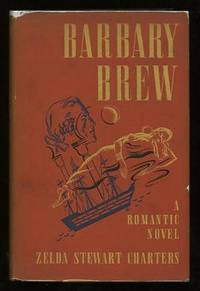 by Charters, Zelda Stewart
New York: Stackpole Sons. Very Good in Very Good- dj. (c.1937). First Edition. Hardcover. NOISBN . [solid copy, some wear to the lower extremities (slight fraying at bottom corners and base of spine), light dust-soiling to top edge; jacket has minor tears at a couple of corners, small nick at fore-edge of front panel, slight paper loss around top of spine (no text affected), moderate soiling]. Historical romance set against the backdrop of the American war with Tripoli (1801-1805). "The infant American Republic had no navy with which to fight pirates at the beginning of the nineteenth century -- and that is how the young American physician, who is the hero of [this book], came to be captured, held as a slave, and projected into a torrid romance in the harem of a Barbary king in Tripoli. Corsairs, harem girls, international intrigue, war and high romance are the ingredients of [the story]. Rich in atmospheric detail and local color, [the novel] is an exciting historical romance -- with a difference." The New York Times, in reviewing the book, found the story incredible, but allowed as how the author, "unpracticed novelist or not, deserves great credit for two things -- for hitting upon a scene as fresh as that of [the Tripolitan War] and for the studious care with which she has built that scene into a detailed and credible background for her story." . (Inventory #: 13476)
$35.00 add to cart Available from ReadInk
Share this item
ReadInk
Offered by

The Original Sin: A Self-Portrait [*SIGNED*]

by Rosenberg, Philip, and Sonny Grosso