The Commentaries of C. Julius Caesar 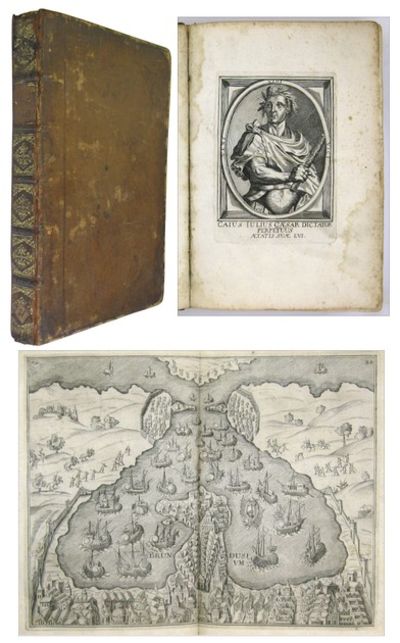 by (CAESAR, Julius). EDMONDS, Clement
London: R. Daniel. 1655. Subtitled: "Of his Warres in Gallia; and the Civil Warres betwixt him and Pompey. Translated into English: With Many excellent and judicious observations Thereupon: As also The Art of our Modern Training, or Tactick Practice; Whereunto is adjoyned the Eighth Commentary of the Warres in Gallia; with some short Observations upon it. Together with the Life of Caesar, and an Account of his Medalls; Revised, Corrected and Enlarged." Folio, contemporary paneled calf rebacked and recornered with original spine laid down, five raised bands. Fourth edition of Edmonds' translation of Caesar's Commentaries, with additional engraved title page and 14 engraved plates (nine of which are double-page). Sir Clement Edmonds "had a high reputation for learning and as a writer on military art" (DNB); his translation of the Commentaries first appeared in 1600. "This excellent and well-known exposition of Caesar was always popular. The text is divided into short chapters with critical and explanatory notes to each" (Cockle 71). The lively plates depict the armies of Caesar in formation, in camp, in battles, in sieges, etc. With Hirtius' continuation. Hirtius, Roman consul and commander and friend of Caesar, served with him in Gaul. Text embellished with woodcut initials, head- and tailpieces. STC C200. Plates fine. Some expert paper repair to first few leaves, index leaf provided in early manuscript. A very good copy in handsome contemporary calf. Hardcover. Very Good. (Inventory #: 600004)
$2625.00 add to cart Available from
Ken Lopez - Bookseller
Share this item