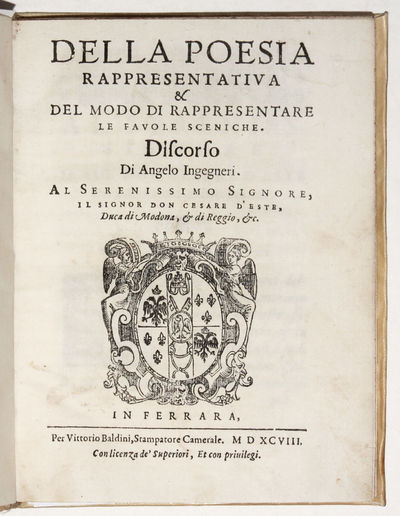 by INGEGNERI, Angelo
Ferrara: Vittorio Baldini, 1598. Hardcover. Very Good. 4to - over 9¾ - 12" tall. 4to., (4) ff., 84 pp., including woodcut arms of dedicatee Cesare d'Este on title. Bound in old vellum. Very minor soiling in lower blank margin of title, otherwise fresh genuine copy. Scarce first edition of these two essays on dramatic poetry and the practical aspects of set design and theater production, of interest among 16th century Italian treatises for their monographic focus and particularly their direct link not only to a particular Italian court (Ferrara) but even to a specific production. According to Weinberg, "his point of view is essentially a modern one, and it rests upon two assumptions: concern with the problems of the stage director, and the conviction that only the pleasure of the audience need to sought as an end." - Weinberg, History of Literary Criticism in the Italian Renaissance, p. 1090. The work was written some years after Ingegneri had overseen a seminal staging of Sophocles' Oedipus Rex at the Teatro Olimpico in Vicenza-a roman-style structure that would be Palladio's last work-and marks the culmination of Ingegneri's dramaturgical theory and extensive experience of stage practice. The production of Oedipus Rex, put on by the scholars, artists and musicians of the Accademia Olimpica, was designed as an experiment in the reconstruction of ancient classical drama. (A manuscript in the Ambrosiana reveals the participation of Vincenzo Scamozzi.) But while Ingegneri adhered to certain Aristotelian principles, his belief in the importance of visual effects distinguished him from the ancient philosopher: whereas Aristotle dwelt on plot and character, Ingegneri emphasized design, movement, layout, and visual effects. Thus for example he chose to forego the use of masks that conceal the actors' expressions, and engineered hidden light sources to dramatically illuminate their faces, creating a chiaroscuro effect of the sort associated with Carravaggio in contemporary painting. To heighten the visual drama, the theater itself was equiped with unusual trompe-l'oil scenery of long streets receding to a distant horizon. Ingegneri is thus rightly recognized as an important figure in the modernization of stage design and production. The present work's opening discourse, on dramatic poetry, helps to explain Ingegneri's dramaturgical philosophy. Focusing on the staging of 'pastorale'-the dominant form of dramatic poetry in the late 16th century-the essay discusses two of Ingegneri's main concerns: providing the audience with a pleasurable experience, and making productions as believable as possible. Both of these goals were relatively easy to effect with pastorale, which was characterized by simple, down-to-earth storylines and a pleasantly bucolic setting. As Ingegneri points out, pastorale allowed the language used on the stage to plausibly match the location where the action takes place, the possibility of presenting action in real time, and realistic dialogue devoid of "difficult thoughts stretched out at great length." To a greater extent than with classical drama, the dramaturg was thus able to use creative staging techniques and visual effects to maximize audience enjoyment and verisimilitude. * Adams I.116; DBI (s.v. Ingegneri); Weinberg 1090-3. (Inventory #: 4762)
$4,850.00 add to cart Available from Martayan Lan
Share this item
Martayan Lan, Inc.
Offered by