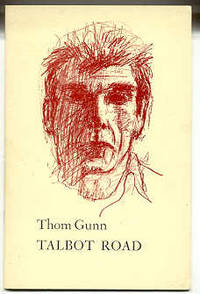 by Gunn, Thom
NY: Helikon Press, 1981. First edition, limited to 400 numbered copies, 186 of which were issued signed. Illustrated stapled wraps. This copy is not numbered but has been signed & dated "1996" by Gunn on the title page. Additionally, Gunn has written on the page, "The mind is an impermanent place, isn't it, but it looks to permanence," a quote from the text. Fine condition. Unusual as such. Signed By Author with Quotation. First Edition. Soft Cover. Fine/Not Issued. 8vo - over 7¾" - 9¾" tall. Chapbook. (Inventory #: 1200425)
$125.00 add to cart or Buy Direct from Revere Books
Share this item
Revere Books
Offered by

Any book may be returned for any reason within two weeks of receipt for a full refund of the purchase price with prior notice. Shipping in US is by either USPS priority or media mail at buyer's option.. Books shipped to a FL address are subject to the FL sales tax. VAT and other international shipping fees are the responsibility of the buyer. N.B. International customers: responsibility for orders that are lost or damaged outside of the United States are the buyer's. Revere Books will be responsible for international orders that are lost or damaged en route only within the United States. For unclaimed packages all shipping charges will be retained by the seller. All books subject to prior sale. Orders shipped boxed and bubblewrapped with USPS delivery confirmation.
More from this seller

NY : Penguin Press , 2020
(click for more details about MISSIONARIES)
View all from this seller>