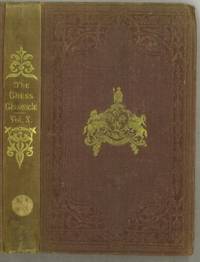 by Howard Staunton (1810-1874) editor
374+vi pages with diagrams and index. Octavo (8 3/4" x 5 3/4") bound in period cloth with blind stamped covers with gilt insignia, and gilt decoration and lettering to spine. From the library of Dino Ruggieri. Volume X (10). (Betts: 7-1) First edition.Br>
The Chess Player's Chronicle, founded by Howard Staunton and extant from 1841-56 and 1859-62, was the world's first successful English-language magazine devoted exclusively to chess. Various unrelated but identically or similarly named publications were published until 1902. The earliest chess magazine in any language was the French Le Palamede, published in 1836-39 and 1842-47. In 1837 George Walker introduced an English-language magazine, the Philidorian, that was devoted to "chess and other scientific games". Only six issues of it were published, and it "expired in May, 1838". The Chess Player's Chronicle became the first successful English-language chess magazine. In 1840 or 1841 Staunton bought the fortnightly magazine The British Miscellany and Chess Player's Chronicle. In 1841 it became The Chess Player's Chronicle. In 1843, the Chess Player's Chronicle became a shilling monthly magazine. Staunton "made the inclusion of a large number of games by himself and other leading players of the day a special feature" of the magazine. He also used the magazine as a forum for attacking others. Staunton was the owner and editor of the magazine until the early 1850s, when he sold it to R.B. Brien. O'Brien became editor of the magazine, but was unable to continue its success and discontinued it in 1856 because of financial losses and his own illness. It reappeared in 1859 under the editorship of Ignatz Kolisch, Zytogorski, and Josef Kling, but survived only until July 1862. Thereafter, a number of magazines appeared with the same or similar name (such as Chess Players' Chronicle) appeared. Arthur Skipworth, assisted by William Wayte and Charles Ranken, wrote The Chess Players' Quarterly Chronicle, which was published in York from February 1868 to December 1871. Skipworth, who had left Bilsdale for Tetford Rectory, Horncastle, and John Wisker became the editors of the new The Chess Players' Chronicle in February 1872. Johann Lowenthal began writing for it in 1873. The magazine ran until 1875. In January 1876, it was succeeded by The Chess Player's Chronicle, whose editor-in-chief was J. Jenkin of Helensburgh. Its editorial staff consisted of Jenkin, Skipworth, Ranken, Wayte, and Andrew Hunter of Glasgow. Billed as a "monthly record of provincial chess", it was published at Glasgow, costing sixpence. Its short run under Jenkin's editorship was marked by xenophobia. The February issue stated that the West End Club had "cleared away the disturbing foreign element which whilom infected the Divan" and referring to Wilhelm Steinitz as "the hot-headed little Austrian". Its third and last issue was published in March. The magazine reappeared in January 1877. It was now under Ranken's editorship, assisted by J. Crum, G. B. Fraser, Skipworth, and Wayte. The first issue apologized for "certain offensive statements and insinuations, seriously affecting the honor of some eminent players", and explained that some members of the present editorial staff had only contributed games and other inoffensive material to it in 1875. Ranken continued to edit the magazine until September 1880. In 1881, the title was enlarged to The Chess Player's Chronicle, and Journal of Indoor and Outdoor Sports, and "the magazine's importance in the chess world was no longer the same". None of these magazines compared in quality with what Staunton had achieved, and the success of the British Chess Magazine, by the turn of the century a superb magazine, put an end to the title in 1902.

Dino Ruggieri was born in, a small city in the Buenos Aires province, October 22, 1921. His parents were both Italians, natives of Porto D'Ascoli. In their early years in Argentina, the Ruggieri's family lived in the country. The family was engaged in agriculture. When Ruggieri was 8, his father purchased a home, where he lived until 2008. In 1938 he was involved in an accident and he was transferred to Buenos Aires for recovery. This was the beginning of his hobby of chess, both as a player over the board and by correspondence, but as well as a major collector of chess materials. After his recovery he became a prominent local chess player and very good representative in postal chess, where he represented Argentina in matches against Italy, Yugoslavia, Holland and other countries. He was using the correspondence with his rivals to offer exchanges. Ruggieri was related to Mr Niemeijer and soon began exchanging materials and making important purchases. He also had frequent contacts with Gregorio Lastra, Normando Ivaldi, Gaspar Soria and Carlos De Veyga, all known collectors of chess. He died in 2009 in 2009 at the age of 88.