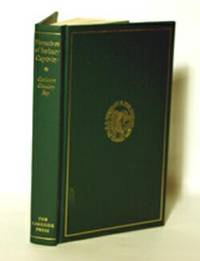 by Cathcart, James Leander, Jonathan Cowdery and William Ray
Chicago: The Lakeside Press, 2007. First thus. Fine in blue-green cloth covered boards with gilt text on the spine and gilt borders on the boards and with decorated end papers and a gilt top edge to the text block. Without a dust jacket as issued. Still contained within the publisher's shrink wrap. The Recollections of James Leander Cathcart, Jonathan Cowdery, and William Ray. The Lakeside Classic edition for 2007. 322 pages of text including an index and a list of the Lakeside Classics published as of this date which is followed by two pages of image credits. Illustrated with 40 reproductions of engravings and lithographs some of which are in color. (Inventory #: TB25825)
$20.00 add to cart Available from
Town's End Books
Share this item