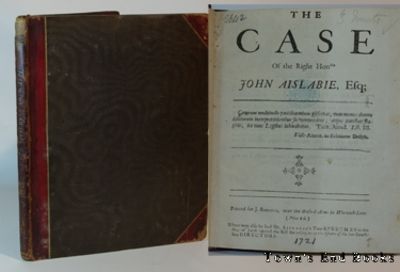 by Aislabie, John
London: J. Roberts, 1721. All three speeches are bound within a late 19th century, 1/2 red leather and patterned cloth covered boards with faint gilt text stamped on the spine. An octavo measuring 8" by 6 1/2" with heavy wear and rubbing to the leather fore corners of the boards and with chipping to the leather at the head and heel of the spine. Older library stamps appear on the title page for the first speech and on the last page of the final speech. Of note is an interesting oval, book store stamp on the last free end page with the words "Sold By H. M. Stationery ___(not discernible)___" surrounding the image of a crown. 42 pages of text followed by and bound-into this volume are: The speech of the Right Honourable John Aislabie, Esq; upon his defence made in the House of Lords, against the Bill for raising money upon the estates of the South-Sea Directors, on Wednesday the 19th of July 1721. The second edition consisting of 22 pages; and followed by and bound in is: Mr. Aislabie's Second Speech On his Defence in the House of Lords, On Thursday, July 20, 1721 published by J. Roberts, London consisting of 22 pages. The pages of these three speeches are in remarkably great shape with little evidence of tanning or foxing. (Inventory #: TB25893)
$500.00 add to cart Available from
Town's End Books
Share this item

City not stated : B. F. Jay & Co. , 1942
(click for more details about Gremlin Americanus)
View all from this seller>