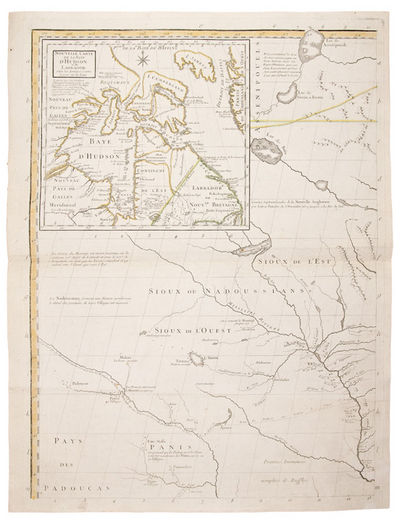 "John Mitchell was not a mapmaker by profession, rather he was a medical doctor, natural philosopher, and botanist of considerable merit. Yet his sole cartographic endeavor...was perhaps the greatest produced in the history of America" (Degrees of Latitude). Mitchell's Map of the British and French Dominions in North America is widely regarded as the most important map in American History. Prepared on the eve of the French & Indian War, it was the second large format map of North America printed by the British and included the best up to date information on the region. Over the next century, it would play a significant role in the resolution of every significant boundary dispute involving the northern border of the then British Colonies and later the United States. It was also the map-of-record at the birth of the United States and continued in this role through several decades in the early life of the country. John Mitchell, a respected British physician, botanist, chemist, biologist, and surveyor, lived for a time in Virginia, but returned to England in 1746, where he remained. Mitchell initially conceived of his map of North America as the best method of presenting to the British public, in a single large format image of all the colonies, the extent of the French threat to the British claims in North America. Mitchell completed his first draft of the map in 1750. However, because he was limited to publicly available sources of information, this initial effort was rather crude (even in Mitchell's own opinion). But word of Mitchell's work spread, and the Board of Trade and Plantations retained Mitchell to make a new map, using the official manuscript and printed maps and reports in the Board's possession, including maps by Fry and Jefferson, Christopher Gist, George Washington, John Barnwell, and others. The Board also instructed all the colonial governors to send detailed maps and boundary information for Mitchell's use. Mitchell's map was first published by Andrew Millar in 1755, the year before war broke out with the French. The map is decidedly pro-English in its interpretation of the various boundaries and geographical information depicted on the map, as would be expected for what amounted to thinly veiled pre-war propaganda. In addition to the geographical detail shown on the map, Mitchell included many annotations describing the extent of British and French settlements. He also submitted a report to the Board in 1752, listing the French encroachments and his ideas of ways to encourage British settlement west of the Appalachian Mountains, as a means of combating French influence in the region. Mitchell's map shows the British Colonial claims of Virginia, both Carolinas, and Georgia extending beyond the Mississippi to the Pacific Ocean. In the West, Mitchell's treatment of the lower Missouri is a vast improvement over earlier maps. Regarding the source of the Missouri, Mitchell noted that the Missouri river was reckoned to run westward to the Mountains of New Mexico, as far as the Ohio does eastward, reflecting his belief in symmetrical geography. Mitchell correctly shows the northern branch of the Missouri to be the main branch of the river, although his estimate of the latitude of the river's source is inaccurate. Nonetheless, the information Mitchell's map provided led Meriwether Lewis to explore the Marias River to determine the northern reaches of the Missouri River basin. The present French edition appeared in 1777 within Le Rouge's Atlas Ameriquain Septentrional. Le Rouge had first published an edition of the Mitchell map in 1756. The speed with which Le Rouge produced a full-size copy of Mitchell's original is an indication of how important the 1755 map was considered at the time. War in the region meant that consistent, reliable cartographic intelligence was vital. Both the English and French versions went through a number of subsequent editions well into the 1770s. Mitchell's map went on to become the primary political treaty map in American history. Regarded by many authorities as the most important map in the history of American cartography, twenty-one variant states and editions of the map appeared between 1755 and 1781.