An American Selection of Lessons in Reading and Speaking… 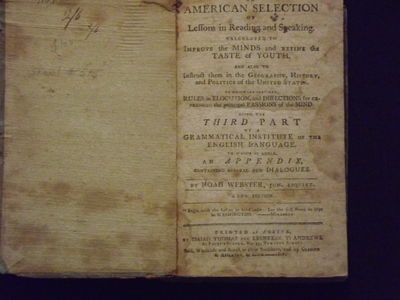 by Webster, Noah.
16mo, leather spine with blue paper covered boards, 240 pp .Lacks endpapers, binding worn and somewhat stained, hinges tender, but in tact, foxing and staining throughout; good overall. Noah Webster (1758-1843) introduced his spelling books in 1783, and they would become the basic school book for children in early 19th century America. Revised many times by Webster, it would teach generations of Americans how to read and spell. This work, which is from the press of Isaiah Thomas and Ebenezer Andrews, was from another series, and designed to improve the minds of young people. It was also published in many editions. (Inventory #: 100917)
$150.00 add to cart Available from
Nicholas D. Riccio, Rare Books
Share this item
Nicholas D. Riccio Rare Books & Prints
Offered by