Astra castra: Experiments and adventures in the atmosphere 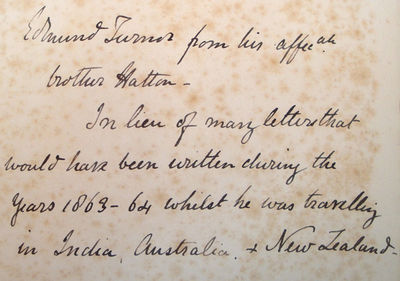 by Turnor, Christopher Hatton
London: Chapman & Hall, 1865. Turnor, [Christopher] Hatton (1840-1914). Astra castra: Experiments and adventures in the atmosphere. xxiii, 530pp. 35 plates, including chromolithograph frontispiece, photographic print tipped to dedication page, text illustrations. London: Chapman and Hall, 1865. 326 x 252 mm. Original cloth stamped in gilt and blind, some wear at spine and corners, light spotting. Frontispiece starting, minor insect damage to upper margin of title, light foxing, but very good. Presentation Copy, inscribed by the author on the front flyleaf: "Edmund Turner from his affecate brother Hatton-In lieu of many letters that would have been written during the years 1863-64 whilst he was travelling in India, Australia & New Zealand." Bookplate of Turnor's son, Christopher Turnor (1873-1940). First Edition. A vast and remarkable Victorian compendium of aeronautical literature from mythological times to the 1860s. Turnor focused primarily on ballooning and other lighter-than-air flight, although there are a few references to heavier-than-air flight attempts. The work contains 22 portraits of balloonists, and lists the names of the first 500 people to ascend in balloons, giving the dates and places of their first ascents and noting that only ten of them had been killed in ballooning accidents. Turnor presented this copy to his brother, Edmond Turnor (1838-1903), a Conservative Party politician who served in the House of Commons from 1868 to 1880. The copy was later in the library of Hatton Turnor's son, Christopher Turnor, the noted architect and social reformer. . (Inventory #: 42425)
$2,750.00 add to cart or Buy Direct from
Jeremy Norman & Co.
Share this item
Jeremy Norman & Co., Inc.
Offered by