Report of a summer campaign to the Rocky Mountains &c., in 1845 [Caption title] [Including: Report of the Major General commanding the army and Abstracts of journals kept by Lt. Turner and Lt. Franklin] 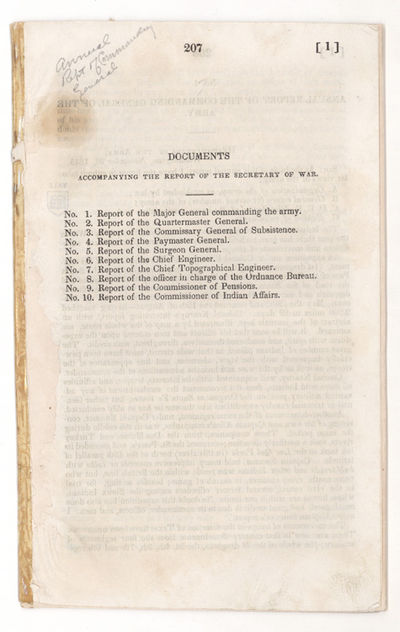 by Kearny, S.W., Winfield SCOTT, etc.
[Washington, D.C.: Government Printing Office, 1846. Senate Executive Document, no. 2. pp. 207-220. 1 vols. 8vo. Removed. Spine reinforced with cellotape (yellowed), first leaf with some loss in gutter not affecting text. Yale duplicate with release. Blue cloth folding box. Senate Executive Document, no. 2. pp. 207-220. 1 vols. 8vo. Westward. In the summer of 1845, Kearny, with five companies of dragoons, traveled over the Oregon Trail from Fort Leavenworth to Wyoming. Near Fort Laramie he met with the Sioux to try to persuade them not to attack the emigrant wagon trains heading West, and, then returned to Fort Leavenworth by a southern route to Bent's Fort and the Arkansas River, meeting with the Cheyenne and Arapaho. Kearny's expedition greatly added to the Army's knowledge of the terrain and the routes west. Wagner-Camp 117; Graff 4413. OCLC: 20555077 (Inventory #: 242886)
$400.00 add to cart or Buy Direct from
James Cummins Bookseller
Share this item
James Cummins Bookseller Inc.
Offered by

Van Deusen's Racing Arithmetic or the Science of Betting