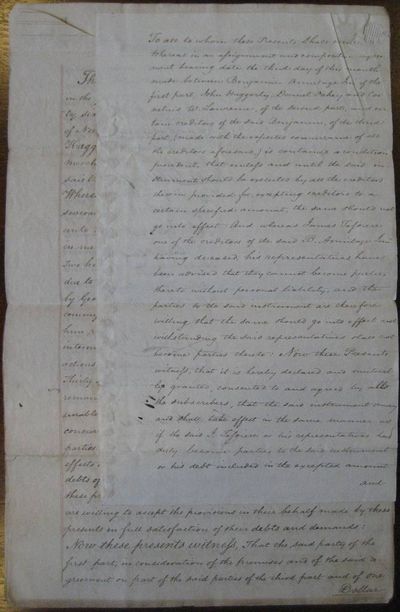 signed
by BENJAMIN ARMITAGE
DS. 9pg. 8 ½” x 11”. April 3, 1826. New York. Two attached documents concerning the assignment of the assets of Armitage’s firm to his creditors. The smaller one is signed by nineteen prominent New York merchants, including “B. Armitage Jr” and “Hugh Auchincloss”. It states in part: “To all to whom these Presents Shall come Whereas in an assignment and composition agreeable bearing date the third day of this month made between Benjamin Armitage Jun of the first part, John Haggarty, Daniel Oakey and Cornelius D. Lawrence of the second part, and certain creditors of the said Benjamin, of the third part…”. The second document is also signed by prominent New Yorkers, including “B. Armitage Jr” three times, and other businessmen, such as “Hugh Auchincloss” and “Danl Oakey”. It states in part: “This Indenture made this third day of April in the year of our Lord one thousand eight hundred and twenty six, Between Benjamin Armitage Junior of the City of New York, Merchant of the first part, Daniel Oakey, John Haggerty and Cornelius W. Lawrence, of the same City, Merchants of the Second Part and the other creditors of the said Benjamin Armitage Jun of the Third Part, witnesseth: Whereas the said Benjamin Armitage Junr is indebted unto the several persons whose names or firms are set forth in the schedule unto these presents annexed in the amounts and manner therein mentioned: And whereas revenue bonds to the amount of two hundred seventy six dollars, for which he is bound are due to the United States, upon goods which have been bonded by George Coggill and another: And whereas he has sold on commission for Benjamin Armitage, Senior, various goods by him received by Thomas Buckley, which sales have been intermingled to a considerable extent with the individual transactions of the said B. Armitage Junr, upon which the amount of Thirty three hundred and ninety two dollars and eight four cents remains due. And whereas the said B. Armitage Junr being unable to pay all his debts is willing and desirous, with the concurrence of his creditors parties hereto, to assign to the said parties of the second part for the benefit of his creditors all his effects whatsoever, in full satisfaction and discharge of the debts of the said parties of the third part…”. The document is in very good condition with dark ink, bold signatures (often followed by paper seals), filing folds and minor browning to the edges. (Inventory #: 3103)
$350.00 add to cart Available from
Stuart Lutz, Historic Documents, Inc.
Share this item