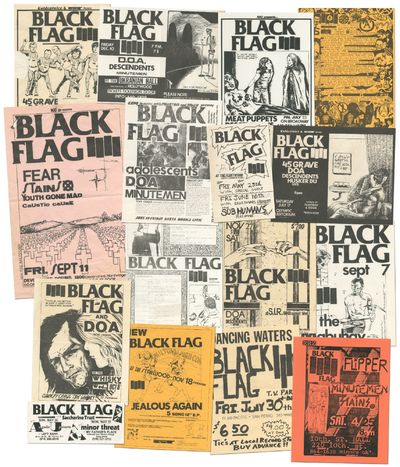 by PETTIBON, Raymond and Black Flag
California, 1982. Unbound. Near Fine. Sixteen original flyers for the American punk rock band Black Flag, various sizes, in very good to near fine condition with some tape abrasions, slight creasing, and tiny chips from removed staples. Eleven of the flyers are confirmed as having artwork by Raymond Pettibon. Black Flag, widely regarded as one of the first hardcore punk bands, was formed in 1976 by its only continuous member, guitarist Greg Ginn. They were innovators of the West Coast punk sound and were influential in the counterculture of punk both in the U.S. and overseas. From 1981-1984 they were fronted by singer Henry Rollins, arguably their most notorious member. Raymond Pettibon, a highly collected American artist, is noted for his comic-like drawings, ink on paper, and his association with Black Flag and the mid-1970s to late 1980s punk scene. Pettibon, Ginn's younger brother, started as a bass player for the band. He suggested the band's name (changed from the original name, Panic, in late 1978) and also designed their logo of vertical bars, with which the band gained notoriety by spray painting it all around the Los Angeles area. Pettibon was also the unofficial artist for Ginn's record label, SST Records, which released influential recordings from other alternative bands such as the Minutemen, Hüsker Dü, the Meat Puppets, Sonic Youth, and Dinosaur Jr. Details of the collection available upon request. (Inventory #: 364995)
$12,500.00 add to cart or Buy Direct from
Between the Covers Rare Books
Share this item

Louisville : Pace Trust , 1981
(click for more details about Trois Caprices)
View all from this seller>