The dispensary: a poem. In six canto's. The fourth edition, corrected by the author 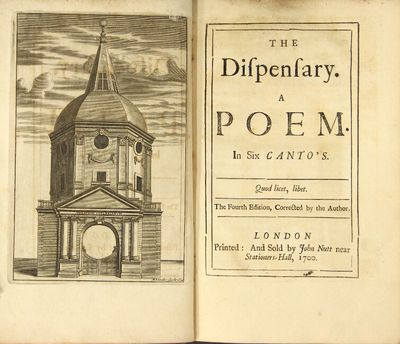 by [GARTH, SAMUEL, Sir.]
London: printed and sold by John Nutt, 1700. 8vo, pp. [22], 96; contemporary full paneled calf, maroon morocco label on gilt-paneled spine, neatly rebacked; minor wear; good and sound, or better. With the engraved bookplate of Viscount Sydney, i.e. Thomas Townshend, 1st Viscount Sydney (1733 - 1800), a British politician who held several important Cabinet posts in the second half of the 18th century whose most enduring legacy is that the cities of Sydney in Nova Scotia, Canada, and Sydney in New South Wales, Australia are named in his honour, in 1785 and 1788 respectively. Garth (1661-1719) was both a physician and a poet, and a fellow of the College of Physicians. On the last page of the Harveian oration at the College of Physicians, Garth "alludes to a scheme, which had been discussed in the college from 1687, for establishing a dispensary where poor people could obtain advice and prescriptions from the best physicians. While a large majority of the fellows of the college supported this scheme, a minority allied themselves with the apothecaries of the city, who tried to defeat the plan, chiefly by charging exorbitant prices for the drugs prescribed. In 1699 Garth published ëThe Dispensary, a Poem,í which is a record of the first attempt to establish those out-patient rooms now universal in the large towns of England. ëThe Dispensaryí ridicules the apothecaries and their allies among the fellows. It was circulated in manuscript, and in a few weeks was printed and sold by John Nutt, near Stationers' Hall. A second and a third edition appeared in the same year, to which were added a dedication to Anthony Henley, an introduction explaining the controversy in the College of Physicians, and copies of commendatory verses. A fourth edition appeared in 1700, a sixth in 1706, a seventh in 1714, and a tenth in 1741. The poem continued to be generally read for fifty years, and some of its phrases are still quoted. It describes a mock Homeric battle between the physicians and the apothecaries, Harvey being finally summoned from the Elysian fields to prescribe a reform" (DNB). Wing G275. (Inventory #: 35435)
$862.50 add to cart or Buy Direct from
rulon-miller books
Share this item