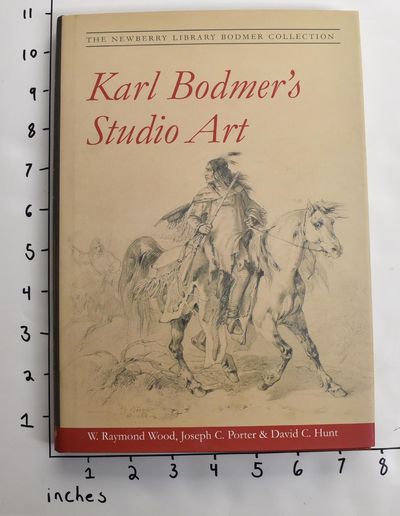 by Wood, W Raymond; Joseph C Porter; David C Hunt; Karl Bodmer
Urbana, Illinois: University of Illinois Press, 2002. Hardcover. NF. Burnt sienna cloth boards, brown dust jacket with tan and black illustration. X 165 pp. 12 color plates32 b/w plates, 16 B/W in-text figures. To document the natural history and inhabitants of the American West, Prince Maximilian of Wied-Neuwied selected the Swiss artist Karl Bodmer to accompany him on his 1833-34 expedition up the Missouri River. Beginning in St. Louis, they journeyed as far as inland waterways could take them, through present-day Nebraska, South Dakota, North Dakota, and into Montana.During the expedition, twenty-three-year-old Bodmer sketched and painted a wealth of landscapes and Native American portraits that would be immortalized as aquatints and woodcuts in Maximilian's published journals and accompanying atlas. Now considered the most vivid and instructive depiction of the nineteenth-century American West and its people prior to the decimation of many Plains tribes by disease, Bodmer's artwork continues to intrigue historians, scholars, and collectors. This remarkable volume collects Bodmer's studio art: a series of compositions he created in his Paris studio. These images, thirteen of them previously unpublished, are augmentations of the artist's expeditionary sketches and watercolors rendered in the complicated process of completing the aquatints. The publication of the Newberry Library Bodmer Collection, together with five sketches from the Baltimore Museum of Art, brings together all of Bodmer's extant works not previously collected in book form. Karl Bodmer's Studio Art also includes sketches that Bodmer did not use for later paintings or engravings. The book is framed by W. Raymond Wood's introduction and annotations of the artwork, Joseph C. Porter's examination of the expedition's scientific and intellectual significance, and David C. Hunt's historical summary of the publication of Bodmer's North American work. An exquisite collaboration, Karl Bodmer's Studio Art promotes a deeper appreciation of the premier documentary artist of the western American frontier, as well as his methods, processes, and unmitigated skill. (Inventory #: 130314)
$60.00 add to cart or Buy Direct from Mullen Books
Share this item