SPEECH delivered at the Meeting of the ADMINISTRATIVE REFORM ASSOCIATION 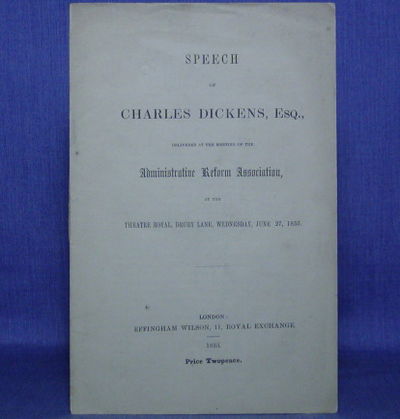 First Edition of this speech Dickens gave to the Administrative Reform Association. Dickens was a founding member of this organization that lambasted the government for its indifference to the plight of the common man... [Dickens] was unable to be present when [Austen Henry] Layard addressed a meeting at Drury Lane on June 20th, but he was entirely in accord with what Layard said. The evidence of government blue books, Layard charged, revealed "records of inefficiency, records of indifference to suffering, records of ignorance, records of obstinacy," that were a shame to the nation. The Civil Service was grossly overstaffed with men busy making work for each other. Lord Palmerston, personally, he denounced for an attitude of levity toward the sufferings of the people. Stung by the attack, Lord Palmerston retorted with a sneer about "the private theatricals at Drury Lane." And Dickens, fired with indignation, determined that such a creature "as this Lord Palmerston" must have it rung "into his soul (or what stands for it) that the time for Dandy insolence is gone for ever." At a second Drury Lane gathering on the 27th... [Johnson] It is said that the mood Dickens exhibited giving this address mirrored the mood of the novel he was then writing -- NOBODY'S FAULT (the name was changed just before publication to LITTLE DORRIT). This copy properly reads "eighteen hundred" on the first page of text, which means that it is not the very first (and very scarce) issue; however this copy does not have the printer Rickerby mentioned on the title page -- his name was added to only the latest issues. In our experience, this mixed issue is the one usually encountered -- though any issue in original wrappers is quite uncommon. Just a bit of soil on the (blank) rear cover, otherwise this copy is fine. Podeschi B237; Eckel p. 235. (Inventory #: 12168)
$395.00 add to cart or Buy Direct from
Sumner & Stillman
Share this item

THE WHITE COMPANY. In Three Volumes

by Doyle, A. Conan

1891
(click for more details about THE WHITE COMPANY. In Three Volumes)