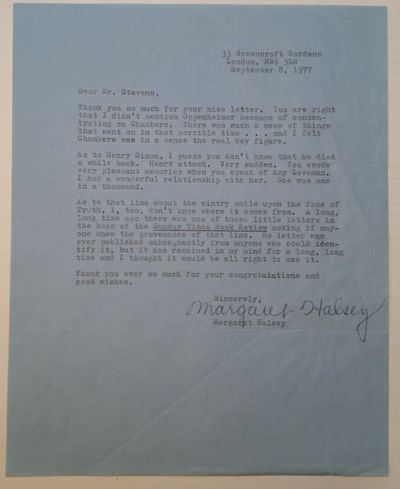 by HALSEY, Margaret (1910 - 1997)
London, 1977. unbound. Fine content typed letter signed. 4to, 1 page on blue paper, 10 x 8 inches, London, September 8, 1977, responding to a letter pertaining to her 1977 book "No Laughing Matter." In part: "...You are right that I didn't mention Oppenheimer because of concentrating on Chambers. There was such a mess of things that went on in that horrible time...and I felt Chambers was in a sense the real key figure...You evoke very pleasant memories when you speak of Amy Loveman. I had a wonderful relationship with her. She was one in a thousand..." Horizontal folds; very good(+) condition. American writer and social critic best known for her books on controversial topics including race relations and radical politics. Her struggles with agoraphobia and alcoholism were the focus of her 1977 book "No Laughing Matter: The Autobiography of a Wasp." Despite being married twice, Halsey was on a number of occasions linked as being romantically involved with Loveman. (Inventory #: 232518)
$200.00 add to cart or Buy Direct from
Argosy Book Store
Share this item

London : Osborne, Thomas , 1745
(click for more details about A Map of Terra Firma. Guiana and the Antilles Islands)
View all from this seller>