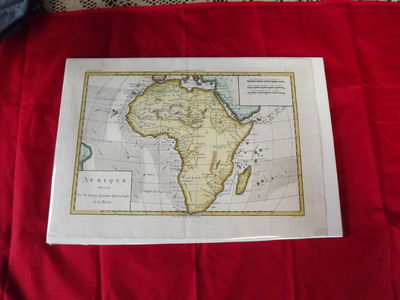 by Bonne, Rigobert.
Engraved map, probable later coloring, straight boarder, plain cartouche, 21 x 32 cm. (12.7" x 8.4"). Nice crisp impression, coloring is good, but uncertain about when it was done, very nice condition overall. Rigobert Boone (1727-1795) succeeded Bellin as the Royal Cartographer of France. He produced highly respected maps during his day, and was know for his accurate detail. This map is number 103 in Norwich's Maps of Africa, and while it is not all that detailed, it is still an attractive map. Norwich 103. legends.mapsofworld.com (Inventory #: 101197)
$150.00 add to cart Available from
Nicholas D. Riccio, Rare Books
Share this item
Nicholas D. Riccio Rare Books & Prints
Offered by