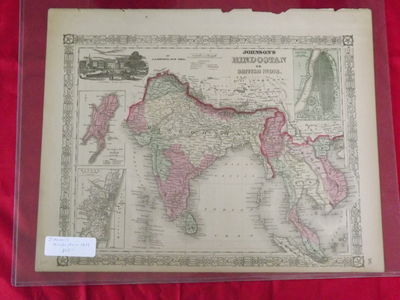 by Johnson, A.J
New York: A.J. Johnson, 1867. Unbound, colored engraved map, decorative boarder, 17" x 14". Some browning and aging; a couple of chips at the edge of a very ample margin, bottom margin somewhat narrow; otherwise fairly bright and clean and in very nice condition. Alvin Jewett Johnson (1827-1884) appears to have entered the map publishing business in 1860. It appears that he obtained J.H. Colton's map copyrights, and published the first installment of the Johnson's New Illustrated (Steel Plate) Family Atlas In that year. Many of the maps Johnson would use would bear the J.H. Colton copyright for many years. Johnson's Atlas would run from 1860 to 1885. While Johnson would use somewhat similar boarder designs, map coloring would appear a little heavier than the earlier Colton maps. This map of Hindostan, or India, is from the 1867 edition of Johnson's Illustrated Family Atlas, and has nice coloring and substantial detail. May require extra postage. Ristow 325-326 (Inventory #: 101163)
$75.00 add to cart Available from
Nicholas D. Riccio, Rare Books
Share this item
Nicholas D. Riccio Rare Books & Prints
Offered by