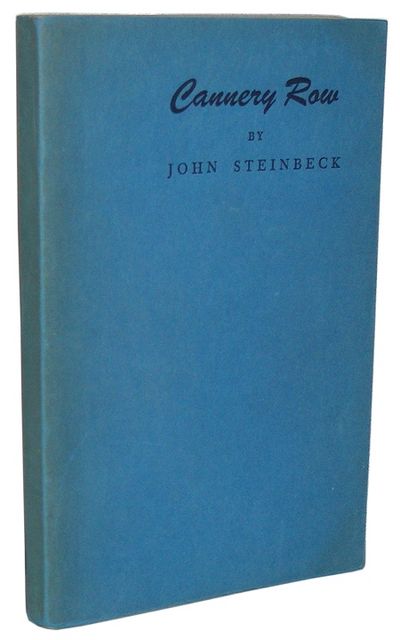 by Steinbeck, John
New York: The Viking Press, 1945 First edition, advance issue in the publisher's blue wrappers. An excellent copy with only some minor fading to spine, else fine. Cannery Row is a Depression-era novel set in Monterey, California. The plot takes place on a grungy street with "the gathered and scattered, tin and iron and rust and splintered wood, chipped pavement and weedy lots, junk heaps, sardine canneries of corrugated iron, honky tonks, restaurants and whore houses, and little crowded groceries, and laboratories and flophouses." The actual street in Monterey has since been renamed "Cannery Row" in honor of this iconic novel. The plot features an unlikely cast of characters, including a marine biologist, a grocer, a restaurateur, and a group of local vagabonds. Cannery Row is exemplar of Steinbeck's talent for making even the most unsavory characters relatable and endearing; Mack and his group of homeless squatters are described as "gentlemen and philosophers united by a common dislike of a steady job and a mutual feeling for the pleasures of living according to their lights." Much of the inspiration for this novel and its 1954 sequel Sweet Thursday were drawn from the author's own life; Steinbeck was born in Monterey County, grew up knowing fishermen and other laborers, and was close friends with a marine biologist, Ed Ricketts, who worked on the real Cannery Row.. First Edition. Fine. (Inventory #: JS042)
$1,750.00 add to cart or Buy Direct from
B & B Rare Books
Share this item

New York: Charles L. Webster and Company, 1885-1886
(click for more details about Personal Memoirs of U. S. Grant)
View all from this seller>