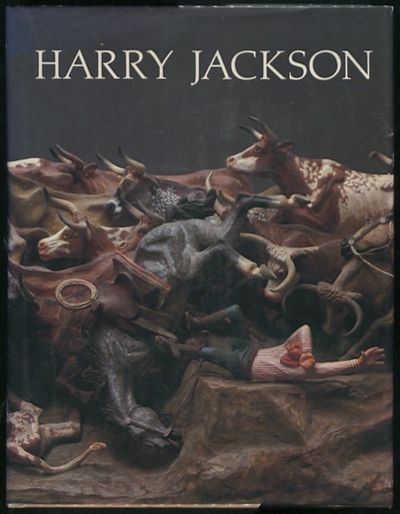 by Pointer, Larry, and Donald Goddard
New York: Harry N. Abrams, Inc.. Near Fine in Near Fine dj. 1981. First Edition. Hardcover. [minor shelfwear and light soiling to cloth at bottom edges of covers, no other significant wear; jacket shows only light rubbing, mostly to rear panel]. INSCRIBED and SIGNED by the book's subject, the noted Western painter and sculptor; the inscription is to film director George Sherman and his wife, and makes reference to "the 'Duke'" (John Wayne), who was directed by Sherman in eight "B" Westerns in the late 1930s -- immediately prior to his ascent to major stardom with STAGECOACH -- and one late-career effort (for both of them), BIG JAKE, in 1971. A lavishly-produced survey of the work of Jackson, containing 397 illustrations, mostly in color, including 104 tipped-in plates, many of which are double- and triple- foldouts. The artist was best-known for his bronze sculptures of Western subjects (he had himself been a cowboy). The artist's connection with Wayne dates from 1969, when Time magazine commissioned him to sculpt the Duke (as he appeared in TRUE GRIT) for a cover story; the creation of the work is discussed and illustrated herein. Following the book's publication, Jackson did another famous bronze sculpture of Wayne astride his horse, that since 1984 has towered over pedestrians and traffic near a busy Wilshire Boulevard intersection in Beverly Hills -- outlasting, by the way, the bank that commissioned it (and for which the Duke had shilled during his later years). So you might call this a "three-way association copy," if there is such a thing. (The inscription, by the way, is dated "LA 7-22-84," which would suggest that the artist may have been in town in conjunction with the installation of the Wilshire Blvd. sculpture; a little further research may be called for, if you care.) (Also PLEASE NOTE that the scanned image accompanying this listing shows some unevenness along the top and bottom edges; this is due to a peculiarity with my scanner, as does not precisely represent the appearance of the book.) Signed by Artist . (Inventory #: 16971)
$200.00 add to cart Available from ReadInk
Share this item
ReadInk
Offered by

The Complete Books of Charles Fort: The Book of the Damned; Lo!; Wild Talents; New Lands

End as a Man

New York : The Vanguard Press , (c.1947)
(click for more details about End as a Man)
View all from this seller>